Small arms on the T. rex and M. gigas may have been key for survival of their species. 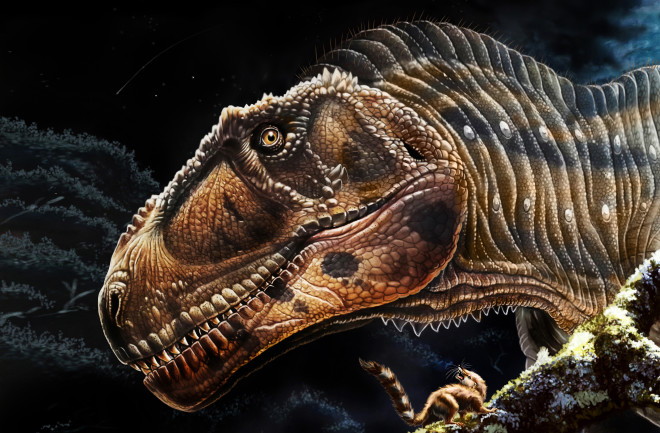 The Tyrannosaurus rex, and other members of the tyrannosaurus family, are not the only carnivorous dinosaur to have tiny arms, according to a study recently published in Current Biology. Researchers from Ernesto Bachmann Paleontological Museum in Neuquén, Argentina, discovered fossilized remains of the Meraxes gigas, a large carnivore — like the T. rex — that also had disproportionate arms. These findings indicated that the T. rex and M. gigas evolved independent of each other and the use of these shorter arms.

“The fossil of M. gigas shows never seen before, complete regions of the skeleton, like the arms and legs that helped us to understand some evolutionary trends and the anatomy of Carcharodontosaurids — the group that M. gigas belongs to,” says Juan Canale, lead author of the study, in a press release.

The study suggests that these two carnivore families evolved independently from each other and that they each happened to develop small arms. M. gigas went extinct nearly 20 million years before T. rex became a species and according to Canale, the two dinosaurs are far apart on the evolutionary tree.

“There is no direct relationship between both,” says Canale in a press release, though the author believes that shorter arms gave both the M. gigas and the T. rex some sort of survival advantage.

“I’m convinced that those proportionally tiny arms had some sort of function,” Canale says. “The skeleton shows large muscle insertions and fully developed pectoral girdles, so the arm had strong muscles.” These large muscles suggest that the arms did not shrink due to atrophy — or lack of use.

Prior research has established that for dinosaurs — like the M. gigas and the T. rex — the larger the head, the smaller the arms.

“I’m inclined to think their arms were used in other kinds of activities,” says Canale in a press release. Adding, “they may have used the arms for reproductive behavior such as holding the female during mating or support themselves to stand back up after a break or a fall.”

The fossil is in great shape and contains new evidence that can help researchers better understand this species of dinosaur. The skull has crests and small hornets. Canale believes that M. gigas developed these features later in life and used them to attract a mate.

“Sexual selection is a powerful evolutionary force. But given that we cannot directly observe their behavior, it is impossible to be certain about this,” says Canale in a press release.

From the fossils, the research team could piece together the life of this M. gigas before it died. The dinosaur was around 45 years old and made its home in northern Patagonia in Argentina. It was about 36 feet (11 meters) long and weighed around four tons. Research also suggests it was part of a large, thriving family before it went extinct.