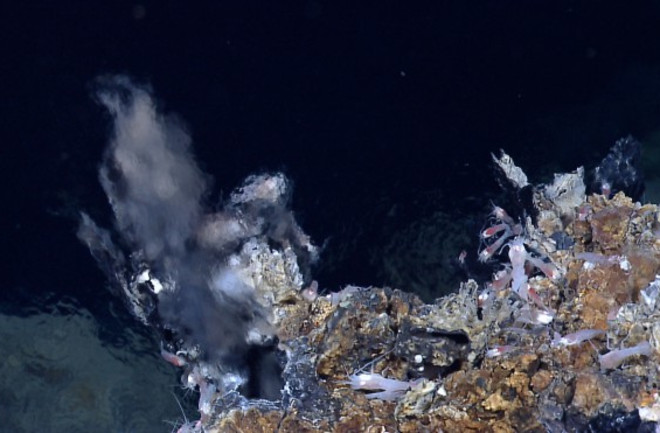 An active hydrothermal vent at the Von Damm hydrothermal field. (Image: NOAA Okeanos Explorer Program, MCR Expedition 2011) In 1977, with the discovery of heated water spewing metals from the seafloor along the Galapagos Rift, scientists were taken by surprise. The ocean floor had always been assumed to be a static, low-energy environment, a passive repository for detritus falling from more dynamic surface waters. But the powerful vents revealed a new dimension to the deep sea - it was an important interface between the molten mantle and the surface world, a site where enormous amounts of energy were streaming into the cold depths of the oceans. In the intervening decades, hundreds of seafloor vents have been discovered, but they have typically fit within a narrow classification scheme. “Black smokers” are the most well-charted, found pervasively along mid-ocean ridges where new oceanic crust is formed. Slightly cooler systems epitomized by Lost City are the result of mineralogically-specific water-rock interactions. Methane seeps are found most frequently along convergent plate margins, where hydrocarbons break down at depth and are pushed upward into seafloor sediments. While these features all look very different, they’re universally exciting for biologists: with the potential for energetic input separate from the sun, a whole new world of chemosynthetic possibility opened up. Indeed, the resulting analyses were a biological bonanza, revealing new types of metabolisms, innovative symbioses, and bizarre, otherworldly creatures. But as exciting as these vent-based discoveries have been, the picture is incomplete. The fact that so few distinct types of vents have been cataloged is likely due more to our poor coverage of the ocean bottom rather than any first-order geophysical principles. In December, however, a team of researchers from the National Oceanography Centre and the University of Southampton in Southampton, England, published a remarkable new finding: a new type of hydrothermal vent.* At the Von Damm Vent Field (VDVF) in the Caribbean Sea, diverging plates move apart at a mere 15 milimeters per year – much slower than most mid-ocean ridges. This didn’t seem to bode well for rigorous venting activity: “It was originally thought that ultra-slow spreading ridges would not be able to support hydorthermal activity,” notes Matthew Hodgkinson, a PhD student at the University of Southampton who led the study. “As the spreading rates get slower, you generally have a lower magma supply and less heat to power hydrothermal vent fields.” Which is why the 1997 discovery of hydrothermal venting at the ultra-slow spreading Southwest Indian Ridge came as a surprise. VDVF follows in this tradition, and is even more surprising given its slightly off-axis position. Electron-rich 200-degree (C) water was supporting a rich ecosystem comprised of many endemic species. “We’d expect there to be no magma whatsoever,” Hodgkinson explains, “so what’s powering this kind of activity? And what are the chemical consequences?"

A talc-dominated spire found at the Von Damm Vent Field, a newly characterized type of hydrothermal vent. (Image: National Oceanography Centre) During two different expeditions in 2010 and 2013 to the vents, the Southampton researchers tried to get answers, retrieving rock samples and developing high-resolution bathymetric maps of VDVF. When the remotely operated vehicle Isis returned to the ship after a day of sampling with a basket full of rocks, “the scientists would swarm around to get their samples,” Hodgkinson recalls, “bring them inside, take a photo, and do a quick description.” The more detailed analysis of mineralogy and rock precipitation history would be done back in the lab over the coming months and years. Ultimately, the team found something remarkable: the dominant mineral was talc, a magnesium-rich silicate mineral perhaps best known for its softness and starring role in cosmetics products. It’s an unusual mineral to see at the seafloor, likely attributable the high pH values at VDVF (6) compared to those found at canonical black smokers (2-4). With a higher pH, the concentration of dissolved metals remains low, allowing silica to serve as a more prominent mineralogical player. The heat source itself remains a mystery; the researchers are focusing in on fluid circulation and remnant heat from the lower crust / upper mantle that has been drawn up from depth by tectonic activity. These putative deep-seated heat sources could allow slow-spreading systems to actually contribute disproportionately to the flux of heat from the mantle to the crust. Faster-spreading mid-ocean ridges have magma chambers close to the surface, restricting the amount of fluid circulation that can happen, but slow-spreading tectonic systems “allow fluids to percolate, and you can mine heat from deeper in the crust,” explains Hodgkinson. Wherever the key ingredients of heat, fluid flow, and distinct chemical repositories are found, there are likely to be live-giving vents on the seafloor. And as we gain a broader perspective on seafloor processes, it seems that such systems are more diverse than ever imagined.