New Solar Flare Packs the Power of Millions of H-Bombs 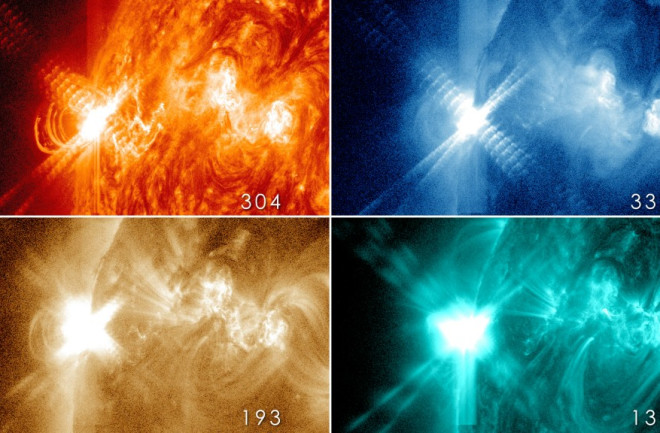 Four images from NASA's Solar Dynamics Observatory of an X3.2-class flare from late at night on May 13, 2013. Starting in the upper left and going clockwise, the images show the flare in four different wavelengths. (Image: NASA/SDO) Last night the sun unleashed its latest tirade: the third flare in as many days, and the most powerful one in 2013 so far. Exploding from the Sun's surface with energy equivalent to millions of 100-megaton hydrogen bombs, the flare spewed intense radiation into space. It peaked last night at 9:11 p.m. EDT. It was not directed toward Earth, but NASA says solar material from all three of the recent flares will pass by the Spitzer Space Telescope and could give a "glancing blow" to the STEREO-B and Epoxi spacecraft. All these spacecraft can be put into a protective safe mode. The latest eruption was characterized as an X3.2-class flare. The X-class category is the most powerful, and each step up in number indicates a doubling of energy. So this flare was more than twice as powerful as Sunday's X1.7-class flare. The panel of images above, from NASA's Earth-orbiting Solar Dynamics Observatory spacecraft, shows the massive eruption of energy in four different wavelengths. Each panel shows what was happening at a different temperature. According to NASA, this provides scientists with insights into the causes of solar flares. Here's a screenshot from a movie showing the two previous flares, which occurred over the course of May 12 and 13 — click on it to watch it (and check out the cool accompanying music):

A movie consisting of images from NASA's SDO spacecraft shows an X1.7-class and X2.8-class flare, as well as two coronal mass ejections, or CMEs, off the upper left side of the sun. Solar material also blew off the lower right side of the sun in a prominence eruption. (Movie: NASA/SDO/ESA/SOHO) A solar flare occurs when magnetic energy builds up in the sun's atmosphere and is then suddenly released with an accompanying burst of radiation across the electromagnetic spectrum. As the sun builds toward the peak of the 11-year solar cycle this year, all of this activity is completely normal. So stay tuned for more.