New Race to the Moon Could Bring Permanent Bases and Observatories 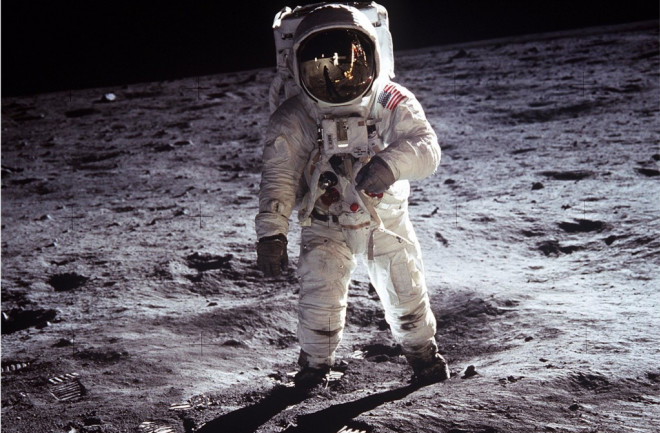 The iconic shot of Buzz Aldrin taken by Neil Armstrong on the Moon. You can see Neil in the visor reflection. (Credit: NASA)

Yesterday, lunar enthusiasts and space buffs gathered to mark the 39th anniversary of the first human steps on the moon. At NASA’s new Lunar Science Institute, the assembled crowd was also preparing for a three-day conference devoted to planning the next phase of lunar exploration. NASA hopes to return humans to the moon by 2020, but they may have some competition in this space race do-over; both entrepreneurs and other space agencies are also stepping up their activities.

At the gathering at Ames, NASA researchers made clear that the goals for the next lunar expedition are ambitious. The United States, they said, needs to focus on creating a permanent presence on the moon, using it as a training platform for missions to Mars and beyond. “We’re going back, and this time we’re going to stay,” S. Pete Worden, director of NASA/Ames, said in remarks opening the lunar science conference. “This is the first step in settling the solar system” [San Jose Mercury News].

Meanwhile, in the private sector, things are heating up with the Google Lunar X PRIZE, which offers a $30 million prize for the first team to send a robot to the moon. One of the teams, Odyssey Moon Limited, announced plans to bring a small telescope to the moon on its first mission, which is tentatively planned for 2011. The telescope will be provided by the International Lunar Observatory Association, a non-profit group that wants to demonstrate the value of the Moon for scientific study of the galaxy, Moon, Earth, sun and stars; followed by human exploration and eventual settlement [The International Space Fellowship].

Other space agencies are getting in on the excitement as well; the Russian Federal Space Agency and the European Space Agency are reportedly collaborating on a next-generation spacecraft that could carry four people to the moon. And just last week, NASA administrator Michael Griffin said it was “certainly” possible that China could reach the Moon before a US mission returned there…. Dr Griffin said China had the “technical capability” to send a manned mission to the Moon before the US [Telegraph].