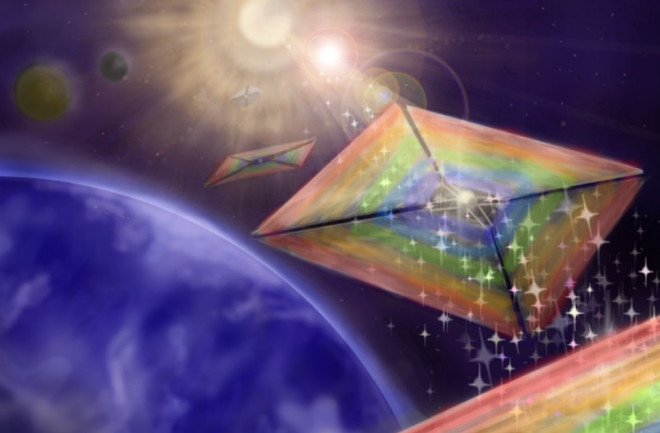 A light sail travels toward another star system in this artist's illustration. (Credit: M. Martin/Rochester Inst. of Tech.)

(Inside Science) -- In long distance space travel, traditional rockets would eventually run out of fuel. There is an alternative: Since as early as the 19th century, scientists have dreamed of building spacecraft with light sails that can accelerate slowly, but for a much longer time, by catching the light from Earth’s sun or, in more modern designs, powerful ground-based lasers.

Researchers have now introduced a lab-tested design for a laser-driven light sail that can self-stabilize and could potentially ride a laser beam all the way out of our solar system.

With a powerful enough laser, one can push a light sail away from Earth like a geyser of water would push a manhole cover. But the slightest misalignment between the sail and the laser beam could send the spacecraft spiraling out of control.

The new light sail reduces the chance of misalignment by changing the material used to convert the incoming laser into propulsion. Most light sail designs simply reflect the light to get a push, but the new design uses a different process known as diffraction that bends the incoming light to also generate a sideways force. If the sail is drifting away from the center of the beam, this force naturally nudges it back.

The researchers have successfully built and tested a centimeter-wide prototype in their lab, according to a paper published in Physical Review Letters in December.