New Images Suggest Hellish Venus Was Once More Like Earth 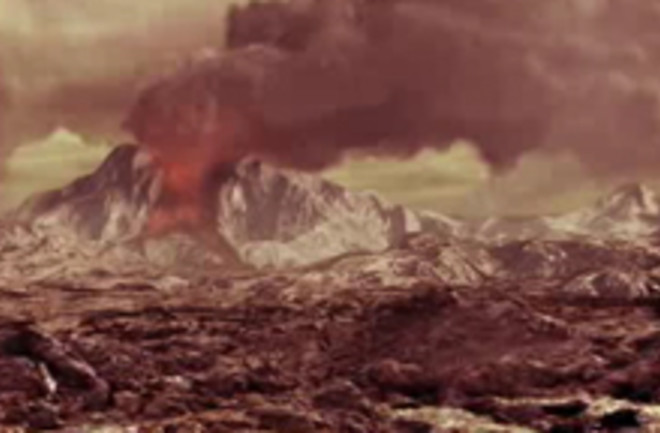 A European spacecraft that has been peering through the thick, roiling clouds of Venus for the past three years has found further evidence that the inhospitable planet once had oceans, volcanoes, and a system of plate tectonics similar to those at work on Earth. The Venus Express has mapped the planet's southern hemisphere using infrared imaging, and found heat variations in the surface rocks, which allows researchers to speculate on the chemical composition of those rocks.

Different surfaces radiate different amounts of heat at infrared wavelengths due to a material characteristic known as emissivity, which varies in different materials [SPACE.com].

In certain highland areas, researchers detected cooler patches of rock whose thermal signatures resemble those of granites on Earth.

On our own planet, granites are made during the process of rock recycling that goes on at the edges of the great geologic plates that cover the Earth. At the boundaries of these plates, ancient rock is pulled deep into the planet, reworked with water and then re-surfaced at volcanoes. Critically, then, if there is granite on Venus, there must also have been an ocean and a process of plate movement in the past [BBC News].

In the study, to be published in the Journal of Geophysical Research, researchers found the granite-like rocks only in certain areas of the Phoebe and Alpha Regio plateaus. Explains study coauthor Joern Helbert:

"It's not all highlands that are different; it's mainly very young volcanic areas that look different." ... This contrasts with basaltic rocks - characteristic of oceanic basins - seen by the Russian landers of the 1970s and 1980s which touched down away from the highlands. [BBC News].

The new findings support the theory that the plateaus of Venus were once continents produced by ancient volcanoes and surrounded by oceans. Researchers say that the only way to determine the chemical composition of the rocks with absolute accuracy would be to send a lander down to sample the surface of those plateau regions. Study coauthor Nils Müller says it's also possible that such a mission could detect small Venusian volcanoes that are still active.

"Venus is a big planet, being heated by radioactive elements in its interior. It should have as much volcanic activity as Earth," he said [SPACE.com].

Related Content: 80beats: Venus May Have Once Had Oceans, But the Water Didn’t Last DISCOVER: Venus Exposed explains how researchers look beneath the planet’s thick clouds Image: ESA - AOES Medialab