The Event Horizon Telescope’s newest images of M87’s supermassive black hole hint at how its jets are fired far into space. 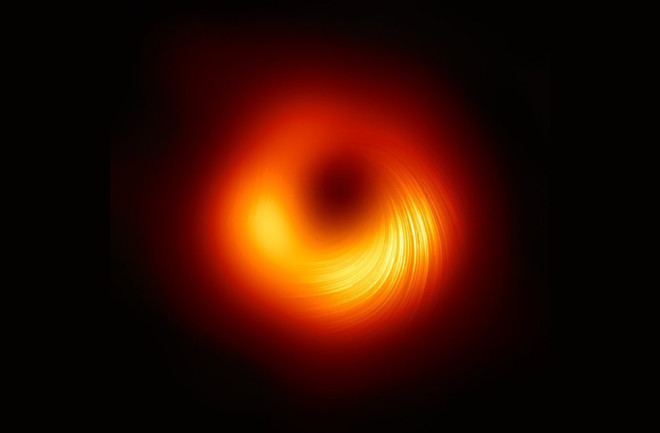 The magnetic field around M87’s supermassive black tweaks the orientation of light waves emitted from the hot, glowing accretion disk (orange) around the black hole. Superimposed as lines on the disk, this signature reveals information about the powerful magnetic field surrounding the black hole. (Credit: EHT Collaboration)

The elliptical galaxy M87 sits 55 million light-years away, at the heart of the nearby Virgo Cluster. Deep inside this galaxy lurks a supermassive black hole that weighs 6.5 billion times the mass of our Sun. That black hole instantly became famous in 2019 when the Event Horizon Telescope (EHT) collaboration released its portrait — the first ever direct image of the shadow of a black hole.

Now, the EHT collaboration has released updated views of M87 that offer an unprecedented look at the light streaming from just outside its black hole. These pictures reveal the complex structure of a powerful magnetic field that astronomers believe is responsible for shooting a 5,000 light-year-long jet from the black hole at nearly the speed of light.

Data taken with ALMA show the orientation of light within a portion of M87’s far-reaching jet. The light’s orientation is related to the structure and strength of the magnetic field in that region. (Credit: ALMA [ESO/NAOJ/NRAO], Goddi et al.)

When light waves pass near a strong magnetic field, the tug of that field leaves an unmistakable mark on them. Like iron filings lining up to show the invisible magnetic field lines of a bar magnet, light waves “line up” — or become polarized — in the presence of magnetic fields, which can reveal clues about the field’s structure and strength. And that’s what EHT collaboration researchers have seen.

“The polarization of light carries information that allows us to better understand the physics behind the image we saw in April 2019,” explained Iván Martí-Vidal at the University of Valencia in Spain, one of the EHT Polarimetry Working Group’s coordinators, in a press release. “Unveiling this new polarized-light image required years of work due to the complex techniques involved in obtaining and analyzing the data,” he added.

One new image shows the polarization of the light coming from the accretion disk of hot material surrounding and flowing into M87’s black hole. At least part of this ring is significantly polarized. That fact, in turn, tells astronomers the disk contains highly magnetized gas. They estimate the black hole’s magnetic field strength is between 1 and 30 Gauss, or roughly 2 to 50 times stronger than Earth’s own magnetic field.

And near the black hole’s event horizon, or point of no return, researchers found the magnetic field is so strong it pushes some material away, even as most flows inward, forever disappearing inside the black hole. Based on models of the accretion disk using this new information, researchers calculate that M87’s black hole is sucking down material at a rate of 0.0003 to 0.002 solar masses each year.

The ability of the black hole’s magnetic field to serve as a gatekeeper, preventing at least some material from falling inside, could be key to how M87’s black hole spews out extended jets of material, which stretch thousands of light-years beyond the galaxy. Astronomers have long believed that magnetic fields play a crucial role in this process, but they are just now getting a detailed look at how exactly it might occur. Such a close-up view will help researchers better tweak their models of how matter and magnetic fields behave extremely close to black holes.

EHT collaborators also used data from the Atacama Large Millimeter/submillimeter Array (ALMA) in Chile — part of the global, virtually linked network of radio telescopes that make up EHT — to map the polarization of light in a section of jet farther from the black hole. So now, astronomers not only have an extremely close-in view, but also a zoomed-out picture of how material and magnetic fields in M87’s jet evolve as they travel from their point of origin.