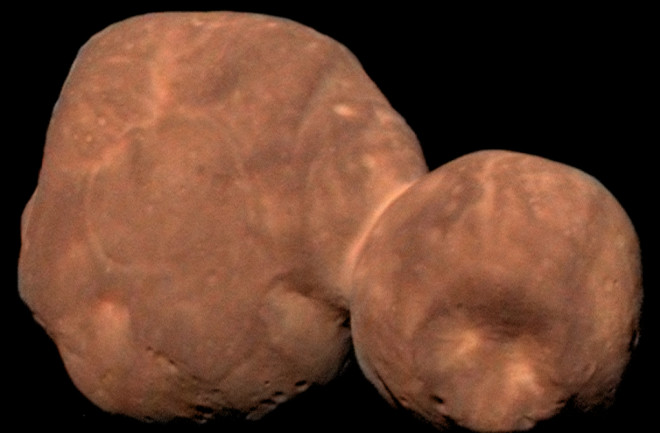 After New Horizons streaked past Pluto in 2015, its main task was over, but it still had work to do. On New Year’s Day of 2019, it made a flyby of another, even more distant object named 2014 MU69, more commonly called Ultima Thule.

Since then, the spacecraft has been slowly but steadily sending streams of information back across the increasingly vast gulf of space between it and Earth. From that information, scientists now know that the snowman-shaped space rock formed from a gentle collision of two bodies, that astronomers now refer to as Ultima and Thule.

In general, Ultima Thule seems to have had a calm history, with little variation across its surface, leading astronomers to rule out more violent collisions that would lead to a more patchwork appearance. These and other details were revealed Thursday in a study led by Alan Stern of the Southwest Research Institute and published in the journal Science.

Ultima Thule’s calm history falls neatly into place with other recent observations. There are a whole herd of spacecraft taking data on oddball space rocks, and where those rocks orbit seems to tell astronomers a great deal about what to expect from their histories. For objects in the asteroid belt and elsewhere in the middle of the solar system, it's common to see a history of violence.

Due to their closer tracks to the sun, these objects move faster, and collide more violently. Objects often break apart into smaller pieces on collision, instead of merging together, and many of the objects currently under investigation show signs of once being part of larger bodies. They’re also more active right now, when more direct exposure to sunlight can cause surprising activity on their surfaces.

But for objects in the Kuiper Belt around Pluto and beyond, astronomers see evidence of a more peaceful existence. Because these objects orbit so far from the sun, their orbital speeds are slower (this is a basic tenant of Kepler’s laws). Also, the solar system is generally less crowded as you look farther out from the sun. So objects collide less often, and at slower speeds, resulting in less small debris.

Pluto showed this phenomenon in its relative lack of impact scars. And now Ultima Thule backs up the same ideas.

While the first images New Horizons sent back showed apparently distinct regions on Ultima Thule, more detailed investigations show little variance in color or composition, again pointing to a history lacking sharp or recent changes. And New Horizons found no signs of dust, moons, or rings around Ultima Thule, another sign that it has spent much of its history alone and undisturbed. Ultima Thule did offer one big surprise.

Rather than a fully round snowman, the two pieces of the asteroid appear to be flattened, more like two pancakes that were poured too closely in the pan and grew together. Since most space rocks are at least vaguely spherical, the flattened nature of Ultima Thule perplexes astronomers.

So far, it’s not clear what caused the flattening. Astronomers often look to asteroids as the building blocks of the solar system, since they’ve undergone far fewer changes than the material that was long ago incorporated into large, complex bodies like planets and their often active moons.

The rest of the New Horizons data won’t finish downloading to Earth until next year, when astronomers can finish mining Ultima Thule’s secrets. But for those researchers looking for a pristine space rock, Ultima Thule may be exactly the right target.