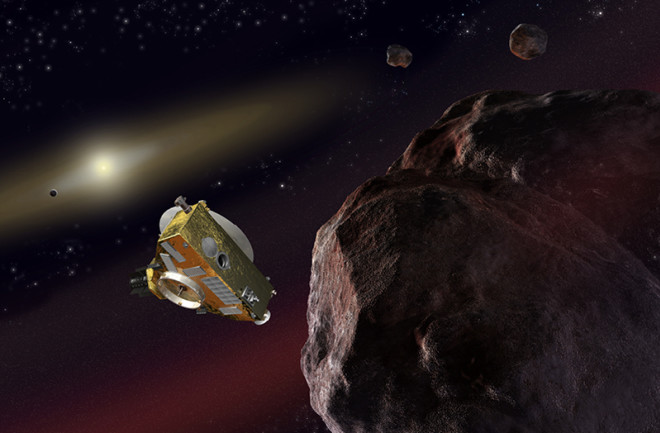 The New Horizons probe, which flew past Pluto three years ago, will pass by a strange new world in the coming hours.(Credit: Roen Kelly/Discover)

As most of America’s East Coast counts down toward midnight tonight, ushering in a shiny new year, a group of NASA scientists and their attendant press will instead be counting down to a more spectacular event: the most distant flyby of a planetary object in history.

After zipping past Pluto in 2015, snapping breathtaking photos and revolutionizing our understanding of the dwarf planet, the New Horizons probe has drifted farther and deeper into the solar system. Tonight, some billion miles later, it will encounter a pristine world known as 2014 MU69, dubbed Ultima Thule (pronounced “ultima too-lee”). This tiny, icy body has remained largely unchanged since the solar system’s birth roughly five billion years ago, providing astronomers a kind of time capsule of conditions from that era.

Researchers discovered Ultima in 2014, hoping to find an object on New Horizon’s existing flight path, and have been counting down to this rendezvous for years. They’ll wait out the final few hours at the Johns Hopkins Applied Physics Laboratory in Maryland, waiting for its closest approach at roughly 12:30 in the morning. If all goes well, the car-sized probe, launched in January 2006, will pass about three times closer to Ultima than it did Pluto. It’ll study the tiny world’s geological makeup, map its surface composition, analyze any atmosphere it may find and — if we’re lucky — provide up-close views of any rings or moons it discovers.

Due to the tremendous distances involved (about 4 billion miles!), all transmissions from New Horizons will take just over 6 hours to arrive on Earth, even traveling at the speed of light. The probe’s actions will be automated, and the researchers won’t start getting back data until tomorrow morning. After its flyby of Ultima Thule, New Horizons will continue its mission until at least April 2021, studying the environment and inhabitants of the Kuiper Belt, the most distant and mysterious zone of the solar system.