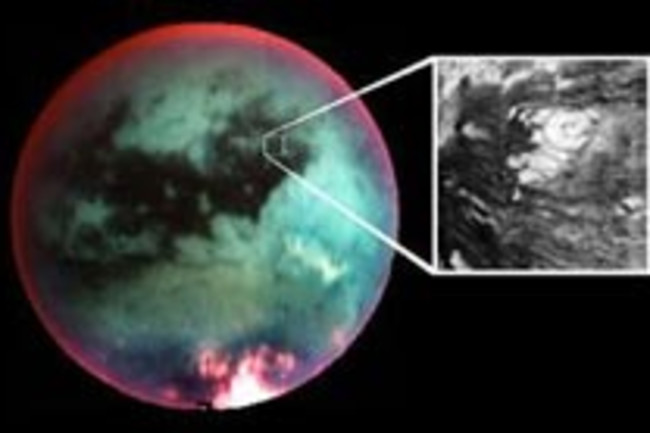 Saturn's moon Titan is already an object of fascination to astronomers: The moon has seasonal weather patterns, a thick atmosphere, and lakes of liquid methane on its surface, and some scientists think it's one of the likeliest spots to find extraterrestrial life in our solar system. Now, researchers have found new evidence that the moon has cryovolcanoes,

which, in the cold of the outer Solar System, would spew a slurry of ice and liquid hydrocarbons, instead of lava. "It's as if it's a sort of constant bubbling cauldron that occasionally explodes big time," says Robert Nelson, a Cassini team scientist [Nature News].

The still-controversial theory regards an area of Titan called Hotei Arcus, which

appears to fluctuate in brightness on timescales of several months.... The cryovolcanism idea was bolstered in 2008, when observations of Hotei Arcus by a radar instrument aboard NASA's Cassini probe revealed structures that resembled lava flows [New Scientist].

The new findings, discussed at this week's Lunar and Planetary Science Conference, are based on radar images taken by Cassini on recent flybys of the moon (radar is required to penetrate Titan's thick methane atmosphere). Overlapping images were used to create a topographical map of Hotei Arcus; the map shows several lobe-like formations, more than 300 feet high, which researchers say resemble the oozing of a viscous, lava-like material. Titan's average temperature is around -290 Fahrenheit, so E.T. hunters have never been optimistic about finding life on the moon's surface. However,

an ice volcano on Titan would tantalize astrobiologists by putting a subterranean heat source close to liquid reservoirs where pre-biotic compounds, such as water, methane and ammonia, could mix [Nature News].

The new images of the formations at Hotei Arcus haven't convinced everyone. Planetary scientist William McKinnon, for one, finds the

images "ambiguous" and says, "It's much more logical — and prosaic — that wind or weather does this." He says the eagerness to attribute volcanism to changes in brightness is akin to a time in the 1960s when scientists studying Mars saw light and dark features and thought it could be vegetation. "It's turned out to be dust" [Nature News].