New Evidence of Hospitable Conditions for Life on Saturn's Moons 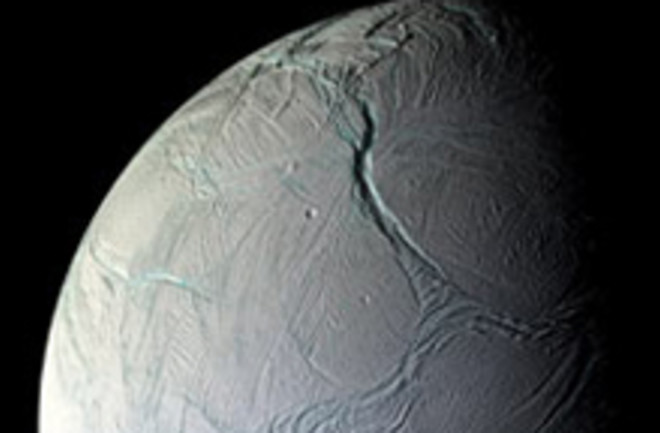 The space probe Cassini, our emissary to Saturn and its fascinating satellites, has made several new discoveries that lend further credence to the idea that microbial life could evolve on the icy moon Enceladus or the moon Titan, with its lakes of methane. During a flyby of Enceladus Cassini snapped pictures of the moon’s surface and the cracks in its icy crust from which jets of water vapor routinely burst upward. The new pictures suggest that the cracks form when the crust splits and spreads apart in a way that is similar to the mid-ocean ridges central to the tectonic system on our own planet. On Earth the spreading of the sea floor is driven by molten rock; Nasa scientists speculate that the liquid beneath the south pole of Enceladus may be water. “Bit by bit, we’re accumulating the evidence that there is liquid water on Enceladus” [Telegraph], said Cassini scientist Carolyn Porco.

Enceladus is already known to have some of the fundamental chemistry required to make and sustain life. Liquid water currently is the major missing ingredient. Dr Porco commented: “We first discovered this region in early 2005 and now it’s nearly four years later, so it’s still kind of brand new; but already there are some of us who really want to go back with a spacecraft that focuses on the south pole of Enceladus and investigates whether or not it is a site of either pre-biotic or biotic processes” [BBC News].

The findings regarding Enceladus were announced at a meeting of the American Geophysical Union, where researchers also revealed new results from Cassini’s flyby of Titan, a strange little moon which is one of the few bodies in the solar system with a significant atmosphere. Researchers have proposed that methane in the atmosphere forms clouds that then rain liquid methane down onto the surface, but the source of the methane has been uncertain. Now, the new data from Cassini backs up a theory that Titan’s surface occasionally erupts with “ice volcanoes,” which spew a super-chilled mix of ammonia, methane, and water into the air. The latest data “not only indicate that cryovolcanism has been going on on Titan in the recent geologic past, but might even be going on on Titan today,” said Cassini scientist Jonathan Lunine [AP].

Finally, a photo from the Huygens probe that landed on Titan in 2005 revealed a dew drop of methane that condensed on the probe’s metal surface, which researchers are calling the first drop of liquid to ever be directly observed on an extraterrestrial body. While the photo gives researchers a gratifying confirmation of their theories, the presence of liquids isn’t a surprise. The Cassini space probe, which took data from above the moon after separating from the Huygens lander, detected what scientists believe are lakes of liquid methane on Titan’s surface. Microbes that eat methane thrive on Earth, and scientists think pools of methane could be comfortable homes for similar organisms on Titan [Wired News].