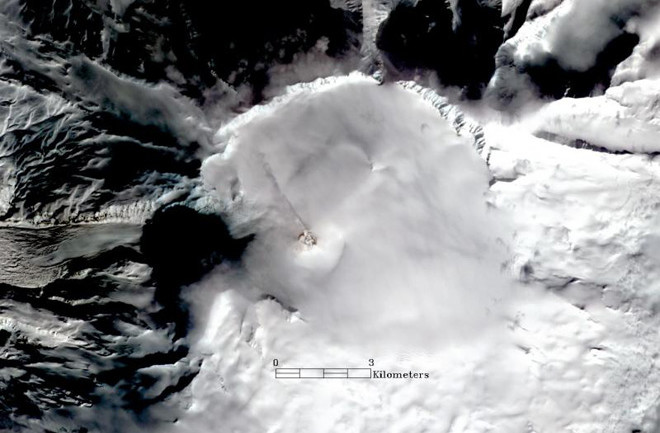 March 4, 2008 ASTER image of the Veniaminof Caldera. The new eruption at the volcano is likely sourced from one of the two small scoria cones within the caldera. Image: Rick Wessels - NASA/AVO Quick bit of news today -- the Alaska Volcano Observatory has raised the aviation alert status at Veniaminof to Orange after indications that a new eruption may have started inside the caldera. There are currently no direct observations of the eruption due to clouds at low levels near the volcano, but a thermal anomaly was noticed earlier today via satellite and seismicity suggests that lava flows and small explosions may be occurring. Thanks to those clouds, no plume has been spotted so far. This is would be a fairly standard eruption for Veniaminof, which last erupted in 2008. Many of the eruptions at Veniaminof between 2003-08 were small eruptions that ranked VEI 1-2. However, as AVO notes, eruptions in 1993-94 and 1983-84 produced large plumes that topped out at over 5.5 km (18,000 feet). Neither AVO nor the FAA have a working webcam pointed at Veniaminof at the moment, but that could change with this new activity. I'll add more information on this eruption as it arrives.