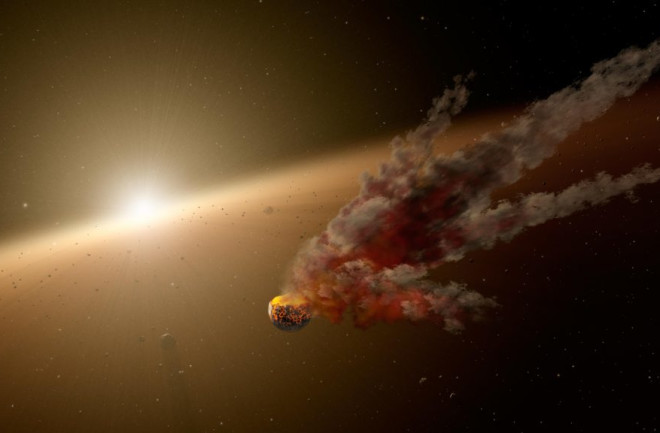 Asteroids may have stopped pummeling Earth some 600 million years earlier than scientists thought, giving life that much more time to evolve. (Credit: NASA/JPL-Caltech)

The solar system once experienced a meteor shower of epic proportions: Asteroids whizzed around the inner planets, crashing down in a rain of fire that left their surfaces scarred for billions of years. Astronomers typically call this period the Late Heavy Bombardment.

But exactly when that fiery assault happened has been a matter of intense debate. The answer has big implications for the evolution of the solar system as a whole, and even for the timeline of life on Earth.

Finding evidence of such a bombardment here on Earth is difficult. Our planet regularly melts and recycles its crust, destroying detailed evidence that might give us a concrete age for the period of heavy impacts. Farther off, on Mercury, Mars, and the rocky or icy moons of the outer solar system, scientists are left to count craters, an imprecise dating method. The other option is to use an objective dating method – radiometric rock dating, for instance – on bodies that have kept cleaner records than Earth. The moon and asteroids – or the meteorite pieces of them that fall to Earth – are the most accessible.

When astronauts first brought back samples of the moon, 50 years ago this summer, scientists found that they all showed evidence of massive and intense impacts at about 3.9 billion years ago. Later lunar missions returned more samples, and all agreed: some disaster occurred on the moon that indicated a massive slew of impacts less than 4 billion years ago. For decades, scientists sought to explain what might have caused a sudden influx of asteroids and comets into the inner solar system.

But more recent evidence has hinted that Earth might have had liquid surface water before this period. It’s hard to reconcile how our planet maintained a surface cool enough to host water while undergoing a massive cataclysm. And dates from meteorites never agreed with the 3.9 billion years ago date from lunar rocks.

Now, astronomers led by Stephen Mojzsis from the University of Colorado, Boulder, have shown that the bombardment may have happened much earlier: 4.48 billion years ago. That would leave plenty of time for Earth to cool and life to emerge. They published their findings August 12 in the Astrophysical Journal.

Most researchers think the Late Heavy Bombardment was caused by the giant planets moving around, orbiting closer to and farther from the sun and pushing lots of smaller solar system objects like asteroids along with them. But Mojzsis points out that there’s no timeline inherently attached to such a reshuffling.

“So look to the asteroid belt,” Mojzsis suggests. “The asteroids predate the planets, by definition. And we have 60,000 meteorites from the asteroids.”

His study, he says, is the first to consider the ages of all those meteorites on Earth. “And we find no uptick at 3.9 billion,” the time of the proposed Late Heavy Bombardment, he says. But his team did see that most of the rocks had been “reset” — basically melted to such an extent that it restarts the radiometric clocks researchers use to figure out a rock’s age. That melting is a sign of massive impacts, and they found the clocks reset at 4.48 billion years ago, only 80 million years after the start of the solar system. “The best explanation is that’s when giant planet migration occurred,” Mojzsis says.

Instead of one big spike, this earlier period of asteroid bombardment would have been a slow tapering-off from the early days when the solar system was little more than rocks crashing into each other. In Mojzsis’ timeline, the giant planets still migrated, but much earlier than previous theories suggested. This means there was no giant spike of meteors, but rather a flux of incoming asteroids that blended into the general chaos of the young solar system.

The best – and only real – argument for a more recent spike of impactors, comes from lunar samples, which do show signs of some cataclysm occurring 3.9 billion years ago.

But, as Mojzsis explains, “If you look at the bombardment record from craters from Mercury, the moon, Mars, satellites of the outer solar system, none of them show an uptick in bombardment. It’s only the lunar samples, which were all collected and returned to the Earth from a small patch of the moon, just some 12 percent of the lunar surface, and all collected near Mare Imbrium [Crater].”

That geographical clustering, more than anything else, hurts the reliability of the lunar samples. It’s clear something catastrophic happened in the Mare Imbrium area, but it’s not as obvious that it must have been a moon-wide — let alone solar system wide — event.

If NASA – or any of the other actors in the increasingly crowded race back to the moon – succeeds in visiting the moon’s more remote South Pole-Aitkin Basin and returning samples from that oldest known crater, it would “complete the puzzle,” according to Mojzsis.

But in the meantime, he thinks his results lay to rest the idea of a Late Heavy Bombardment. Instead, Mojzsis prefers a history where the influx of asteroids and comets slowly wound down from the solar system’s wild earlier days to a gentle drift of space dust and the occasional stray impactor that still occurs today.

Mojzsis’ work doesn’t only depend on measuring meteorite ages. Because there’s a lot of evidence for a migration of giant planets, Mojzsis’ team modeled what it would look like if the event had happened early enough to explain the 4.48 billion years ago date he saw in the meteorites.

“We dynamically modeled what we’d analyzed geochemically. If this is correct, can this predict the reset ages we see on the Earth, moon, and Mars? And it does. At 4.48 [billion years ago],” he says.

And that in turn pushes back the age of a hospitable Earth. If space more or less ceased pelting our planet with asteroids by 4.48 billion years ago, that allows the Earth to cool and form water. The oldest rocks scientists have found on Earth come from zircons, and these indicate Earth had water some 4 billion years ago. The first hints of life appear at 3.8-3.9 billion years ago, an age hard to reconcile with the idea of a massive bombardment of space rocks happening at the same time.

Earth would have still suffered the occasional asteroid blow – we see them even today, and we have strong evidence that one killed off the dinosaurs. But Mojzsis’ work means that Earth wouldn’t have suffered the kind of strikes that would boil away entire oceans and liquefy the whole surface more recently than 4.48 billion years ago.

“I think this resolves the conversation,” Mojzsis says of his work.