Nearly 1 in 6 college students have had sex while driving. 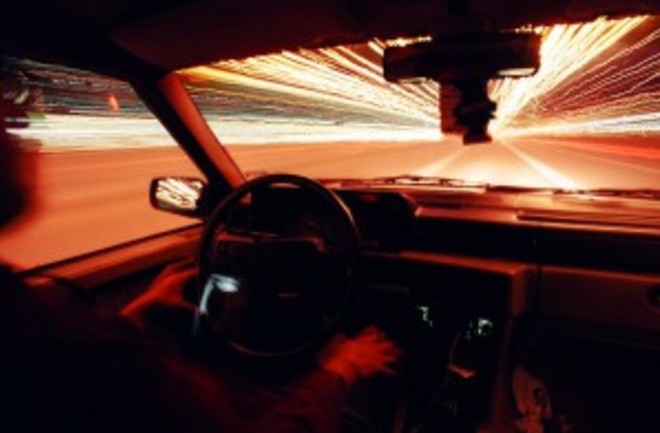 Photo: flickr/senorandersonHere's a sobering statistic for you: according to this study, almost 16% of midwestern college students have had sex while driving (SWD), and nearly half did so while driving at speeds of 61-80 mph(!). And no, these numbers didn't include masturbation. As you might guess, SWD was reported by more men than women, and usually consisted of oral sex, although 11% of SWD participants had actual intercourse. Amazingly, none of those surveyed reported having an accident, though 1.8% "nearly had a crash." I guess there's not much else to do during those long boring drives through the cornfields?A preliminary study of sexual activity as a distraction for young drivers. "In what may be the first in-depth study of sexual activity as a driving distraction in the US, a sample of 195 male and 511 female college students at a Midwestern university (M age=19.7) participated in an on-line study of sex while driving (SWD). Of these, 64 (32.8%) men and 47 (9.3%) women had engaged in sex while driving (SWD). Nine percent of men and 29% of women had engaged in SWD as a passenger. In most recent SWD incidents, respondents reported that the two most common acts were oral sex (70.3%) and genital touching (60.4%). About 11% engaged in vaginal intercourse. Sexual activity lasted from 1 to 10min for 42.7% of the respondents. Nearly half (49.1%) were traveling 61-80mph during sex. Considering respondents' lifetime incidents of SWD, the most common driving errors reported were speeding (37.8%), drifting into another lane (36%), and letting go of the steering wheel (10.8%). Only 1.8% nearly had a crash, and none actually had a crash. Separate regression analyses for male and female respondents revealed that lower intentions to engage in SWD in the future were associated with higher estimates of the probability of a car crash. The authors consider SWD to be an under-reported in-vehicle distraction and encourage more research and prevention efforts." Related content: NCBI ROFL: Study proves driving like an old person is contagious.NCBI ROFL: Guns, bumper stickers and road rage.NCBI ROFL: The return trip effect: why the return trip often seems to take less time.