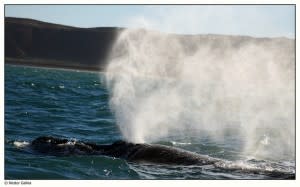 "Given the huge size of their testes (approximately 1,000 kg [Ed. note: that's equivalent to approximately two cows]), it has been hypothesized that North Atlantic right whales (Eubalaena glacialis) have a mating system that is based upon sperm competition. Herein, we report an observation which provides support for this hypothesis. On 11 August 2000 in the Bay of Fundy in Canada, a mature female right whale was observed copulating simultaneously with two mature males. The female made no attempt to resist copulation. For anatomical reasons, double copulation would be difficult or impossible in most mammals; however, it is quite feasible in right whales, and the fact that it actually occurs provides strong support for the belief that females of this species promote sperm competition as a mating strategy." Bonus quote and figure: "The group continued with general SAG [Surface Active Group] behaviors but with no further copulation until 16:11:02 h when the female once again rolled onto her back. As she rolled, a new male in the group (JOS-Y) surfaced on her right side. JOS-E also was positioned on her right side, and at 16:11:05 h moved across her peduncle to resume his previous position along the female’s left side, again stroking her with his right flipper. Intromission was achieved by JOS-E at 16:11:30 h. At 16:11:29 h, a bubble cloud was observed from a third unidentified male, who then surfaced between the female and JOS-Y, taking the position along the female’s right side. JOS-Y remained at the surface to the right of the female, oriented towards her midsection, but did not copulate with her. At 16:12:03 h, the third male’s penis was observed to have entered the female’s vagina. Simultaneous copulation (Figure 1) continued for 40 s until 16:12:43 h, when JOSE broke contact to roll and breathe." 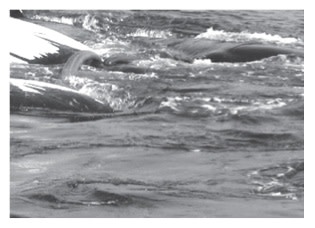 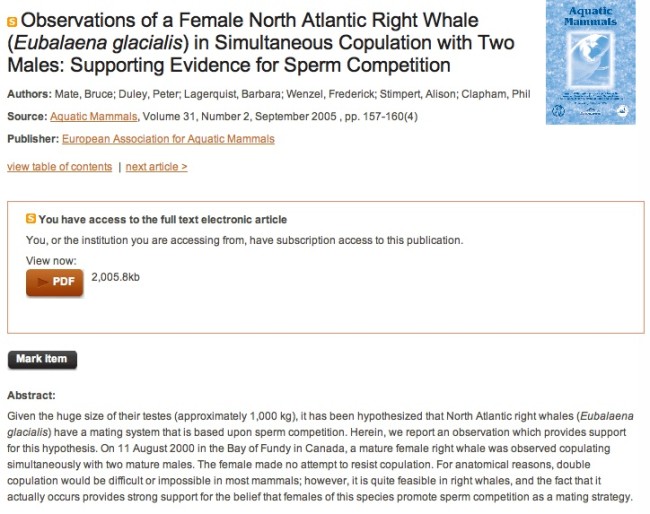 Thanks to @mary_roach for today's ROFL!

Discoblog: NCBI ROFL: Want your rat to get it on while high on ecstasy? Play loud music.