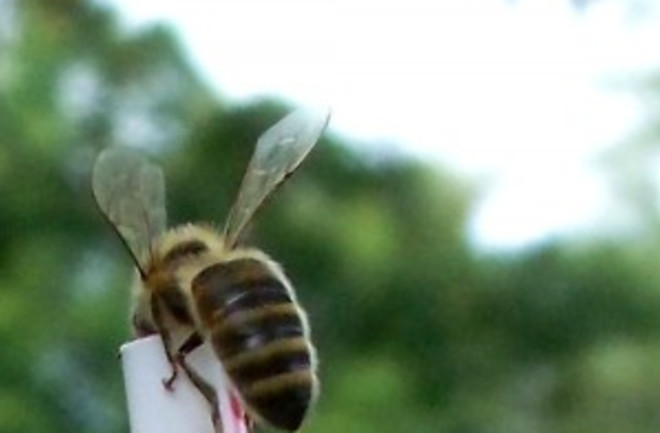 It's insect week on NCBI ROFL! All week long we'll be featuring the funniest scientific papers about our favorite creepy crawlies. Enjoy! Development of an ethanol model using social insects: IV. Influence of ethanol on the aggression of Africanized honey bees (Apis mellifera L.). "Experiments were designed to determine whether ethanol influenced aggression in honey bees. Two experiments are reported. In Exp. 1, harnessed honey bees were fed a 1%, 5%, 10%, or 20% ethanol solution. Two control groups received either a sucrose solution only or no pretreatment, respectively. The dependent variable was the number of sting extensions over 10 min. Analysis showed that aggression in harnessed bees was not influenced by prior ethanol consumption. Because there was some suspicion that the extension of the sting apparatus may be hindered by harnessing, and the authors wanted to use a design that increased ecological validity, Exp. 2 was conducted with free-flying bees. Sucrose or 20% ethanol solutions were placed in front of beehives, and the number of stings on a leather patch dangled in front of the hive served as the dependent variable. The experiment was terminated after 5 hr. because bees exposed to ethanol became dangerously aggressive. A unique aspect of the study was that Africanized honey bees were used."

Curious about articles I-III (there's also a V)? Check them out here.

Discoblog: NCBI ROFL: Is that bee on crack? Oh, wait…it is.