"Forty-eight undergraduate males participated in an experiment designed to investigate the hypothesis that prior exposure to sexual humor would reduce the level of aggression directed by angry individuals against the person who had previously provoked them. In order to examine this suggestion, subjects were first angered or not angered by a male confederate; next, exposed to either neutral, nonhumorous pictures or to one of two types of sexual humor (nonexploitative, exploitative); and finally, provided with an opportunity to aggress against this individual by means of electric shock. Results indicated that exposure to exploitative sexual humor, but not exposure to nonexploitative sexual humor, significantly reduced the strength of subjects' later attacks against the victim." 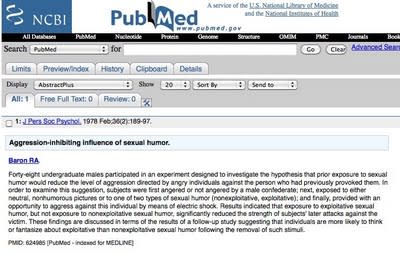