NCBI ROFL: I'm pretty sure this is how the Civil War started...

Insult, aggression, and the southern culture of honor: an "experimental ethnography".

"Three experiments examined how norms characteristic of a "culture of honor" manifest themselves in the cognitions, emotions, behaviors, and physiological reactions of southern White males. Participants were University of Michigan students who grew up in the North or South. In 3 experiments they were insulted by a confederate who bumped into the participant and called him an "asshole". Compared with northerners--who were relatively unaffected by the insult--southerners were (a) more likely to think their masculine reputation was threatened, (b) more upset (as shown by a rise in cortisol levels), (c) more physiologically primed for aggression (as shown by a rise in testosterone levels), (d) more cognitively primed for aggression, and (e) more likely to engage in aggressive and dominant behavior." 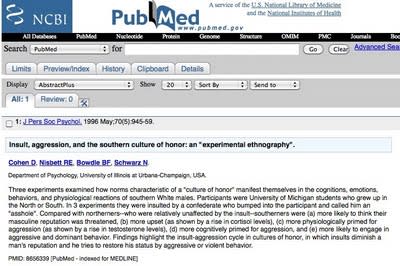