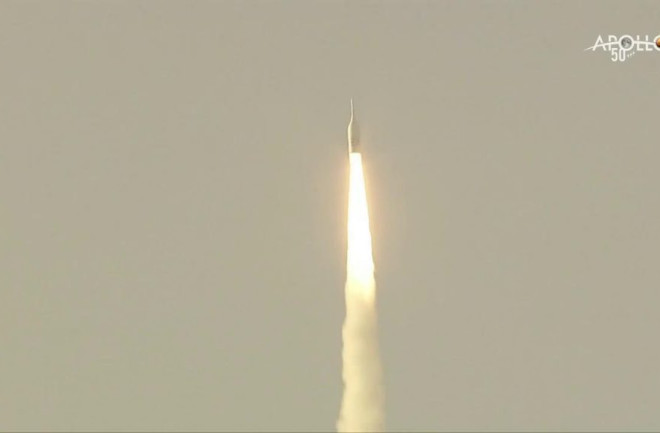 The crew capsule and its launch abort safety system lifted off on time from Cape Canaveral. (Credit: NASA)

On Tuesday morning at 7am EDT, NASA successfully completed the final major flight test for their Orion crew capsule. This is the new craft NASA will use to transport humans to the Moon and Mars as a new age of space exploration begins.

The Artemis Moon mission is slated to begin next year with an uncrewed flight to the Moon. With this final flight test cleared, that should be the next major milestone in the Artemis program.

Tuesday’s uncrewed test centered on the Launch Abort System (LAS), a safety system to jettison the crew capsule away from the explosive power of the main booster rocket in the event of a launch mishap. The three-minute test went off smoothly, and engineers will now comb over the collected data in greater detail.

Thanks to clear weather at Cape Canaveral in Florida, the launch went off perfectly on time. The booster rocket lifted the test craft to a height of 31,000 feet, at which point it was traveling 760 miles per hour. Then, the test officially began, with the LAS pulling the crew capsule away from the booster at an additional 260 mph.

Once the LAS had pulled the crew capsule a safe distance from the main rocket, it flipped around to ensure that the capsule’s heat shield would be pointed down for its descent. A few seconds later, the LAS released the crew capsule to allow it to fall back to Earth.

Under normal circumstances, the crew capsule would then release parachutes so it could drift safely down to a gentle splashdown in the Atlantic Ocean. However, NASA has performed neatly 50 tests of the parachute system, and decided it wasn’t necessary in this case. Therefore, the capsule instead plummeted to a hard crash into the water.

On its way down, it released a dozen backup data canisters, which NASA collected. Based on the live data collected, though, the agency is pleased. Don Reed, manager of the Orion Program’s Flight Test Management Office at Johnson Space Center in Houston, said in a telecom that they “couldn’t have asked for a better flight, better mission, better performance.”

If you missed the early morning launch or simply want to experience it again, you can watch it here.