The Kilopower reactor is tiny, and it could power the spacecraft of the future. 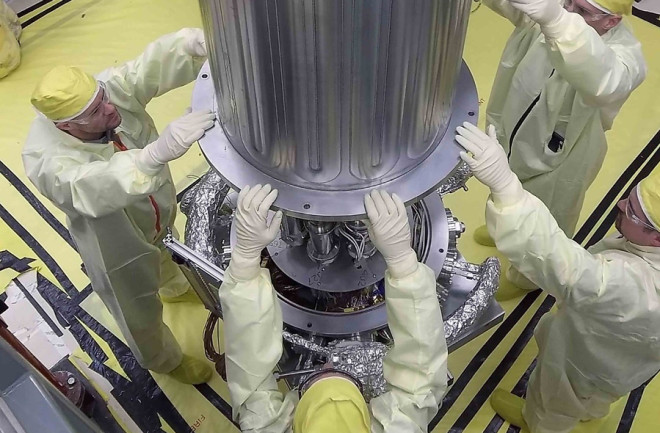 NASA and National Nuclear Security Administration engineers lower the wall of a vacuum chamber around the Kilopower reactor system. The chamber will help test how the system performs in space-like conditions. (Credit: NASA)

Want to start a space colony? Even if you don’t, space agencies across the globe do. Whether it’s a moon base now, à la the Trump administration’s plans for NASA, or a Mars landing later, such a colony will need a lot of power. And given the possibility of light-obscuring dust storms on the Red Planet and the moon seeing an uneven amount of sunlight, solar panels may not cut it. But don’t worry — Los Alamos National Lab has a plan.

It hinges on nuclear power, which, at its most basic, consists of harnessing energy from radioactive elements. Often, this energy comes from a process called fission, when a neutron rams through an atom’s nucleus, splitting it. A nuclear reactor houses this chaos and uses the resulting heat to generate power.

Now, experts at Los Alamos are pushing to get a high-power, next-generation nuclear reactor into space. Their best shot is called Kilopower: a reactor the size of a paper towel roll, enclosed in protective casing the size of a tall trash can, weighing around 900 pounds. It relies on splitting uranium atoms and generates up to 1 kilowatt — enough to power 10 43" LED TVs or even run a few Mars rovers like Opportunity.

Remarkably, none of Kilopower’s components are that new. NASA has been working on space-ready nuclear reactors almost since the agency’s inception in 1958. But according to David Poston, a nuclear engineer at Los Alamos who’s working on the technology, such programs “grew too expensive or went on too long to be continuously funded.” Instead, NASA has relied on so-called radioisotope thermoelectric generators (RTGs), small generators filled with an isotope of plutonium — an element that’s increasingly in short supply. RTGs provide power from the heat generated by this isotope’s decay, rather than splitting any atoms.

Kilopower’s uranium fuel is much more abundant, but the real beauty of Kilopower is “how we glued it together,” says Poston. He and Patrick McClure, another Los Alamos nuclear engineer, found a way to repurpose existing parts into a new, streamlined technology. The reactor itself — where the atom-splitting actually happens — sits inside a heat pipe. Usually, heat pipes funnel out heat that’s a byproduct of radioactive decay. But Kilopower’s pipes trap that heat and use it to power one of several built-in engines that generates electricity. There are nuclear emissions as well, but it’s still a safe device: People can stand near it a few minutes at a time while it’s powered on, and while it’s turned off, it emits less radiation than what you’d inherently experience on Mars. (Unlike Earth, the Red Planet lacks a magnetic field to block harmful solar radiation.)

Poston and McClure just wrapped up a prototype phase to test the system’s potential. They put the current version through its paces with an array of simulated challenges — it passed with flying colors.

And the timing couldn’t be more perfect. With plutonium scarcity making RTGs less useful, NASA needs a new source of power for its upcoming missions. Kilopower’s first trial run, on a robotic lunar mission, could come as soon as the mid-2020s. Early proposals from the agency also call for a charging station on the moon’s north pole, and Kilopower could fit the bill. The reactor would charge two autonomous rovers of around 250 watts each as they explore that area.

Assuming it works out, next would be a fleet of four scaled-up versions of Kilopower. These 10-kilowatt reactors could power a base on the Red Planet. A human habitat there would need about 15 kilowatts to run smoothly, with the rest of that power going to recharging equipment.

Kilopower’s uses extend beyond moon rovers and Mars bases. The most exciting, Poston says, is using the reactor for something called electric propulsion. This would involve using electric motors powered by a combination of Kilopower and other fuel sources to produce thrust in rockets and probes, allowing for detailed studies of faraway celestial bodies like Jupiter and Pluto.

Plus, the reactor even has a few Earth-based applications. “We actually have designs for the ocean floor or an island or the Arctic, maybe an army base in a theater of war, or even disaster relief,” McClure says. “There are lots of applications for this type of technology.”

Whenever people in an isolated area need electricity, Kilopower could pave the way, old technology made new.

This article originally appeared in print as "NASA's Powerful Plan."