The first working seismometer on Mars has detected 174 marsquakes in just 10 months. The results confirm that the Red Planet is both seismically and volcanically active. 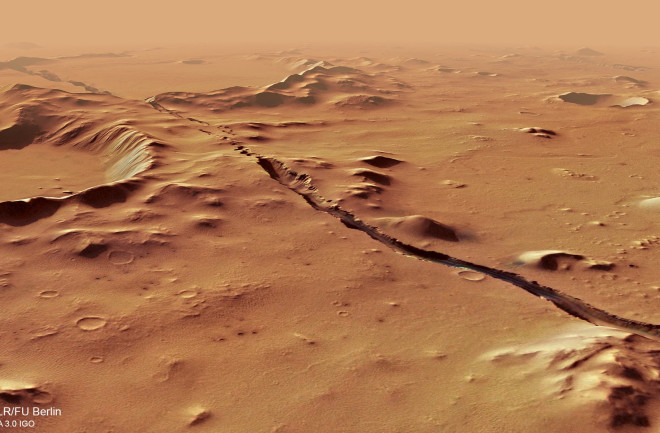 Not far from Mars’ equator, a series of strange fissures rip deep into the Red Planet’s surface. The cracks of Cerberus Fossae run for hundreds of miles, cutting through craters, hills and everything in their path. Relatively young-looking volcanoes nearby, combined with trails of tumbling rocks, have long fueled speculation over whether the region is still active today.

Now, there’s no need to wonder anymore. In a series of papers published Monday in the journals Nature Geoscience and Nature Communications, scientists released the first 10 months of discoveries from NASA’s Mars InSight lander. Its findings, among many others, include a resounding answer to the mystery of Cerberus Fossae — the Red Planet is geologically active and bustles with marsquakes.

The InSight lander was designed to study martian seismology, geophysics, meteorology and magnetism. It carries the first working seismometer and first magnetometer to ever land on the Red Planet’s surface. And while InSight’s lack of wheels might bring fewer news headlines than a rover like Curiosity, astronomers say its findings will ultimately help them better understand the geological processes that have shaped our neighboring world.

On a typical spring evening on Mars last year, not long after the daytime winds settled and the stars came out, InSight’s instruments detected a strong seismic jolt. Another followed some 80 minutes later. The pair of marsquakes measured magnitudes 3.0 and 4.0 — surprisingly strong. After analyzing the data, researchers determined the quakes were coming from Cerberus Fossae, which sits roughly 1,000 miles away.

“For the first time, we’ve established that Mars is a seismically active planet,” InSight Principal Investigator Bruce Banerdt said during a media briefing last week. “And the seismic activity is greater than that of the moon.”

On our own planet, magnitude 4.0 earthquakes are big enough to feel beneath your feet, but not big enough to inflict much damage. Still, InSight’s accomplishment is akin to landing a single car-sized probe in West Texas and having it detect a series of relatively small earthquakes in Los Angeles.

“We’ve seen evidence for volcanic flows, faulting and fluvial flows — water on the surface — within the last 10 million years in (Cerberus Fossae),” says InSight Deputy Principal Investigator Suzanne Smrekar of NASA’s Jet Propulsion Laboratory. “Our quakes that we have been able to locate so far are in that area. It’s intriguing in that if you just took a simple model of the thermal evolution of Mars, we wouldn’t really expect such recent volcanism in that area."

As they learn more about the specific kind of geologic activity happening in Cerberus Fossae, it should also offer clues about the variability of volcanoes around Mars, she added.

The shaking didn’t stop there, either; InSight ultimately felt a whopping 174 seismic events on Mars. The marsquakes fell into two distinct categories: 24 were large and far away from InSight, and the others were much smaller and had distinctly higher wavelengths, a sign they were propagating closer to the surface.

So far, Mars’ seismic activity seems similar to what exists on Earth away from plate tectonic boundaries. And the importance of these marsquakes goes far beyond the gee-whiz factor of simply knowing that they exist.

Much of what geologists have learned about the interior of our own planet comes from seismic activity. As seismic waves travel through a world’s interior, their speed and direction change as they hit materials with different densities. So, with each signal sent back by NASA’s InSight lander, scientists can peek inside the Red Planet.

NASA’s InSight lander has its seismic instrument tucked under a shield to protect it from wind and extreme temperatures. (Credit: NASA/JPL-Caltech)

The data are also shedding light on Mars’ atmosphere and even its magnetic field. NASA scientists say they were surprised to find that the localized magnetic field around InSight is 10 times stronger than expected based on satellite observations.

“This indicates that there are magnetized rocks that lie beneath the InSight landing site,” said mission co-investigator Catherine Johnson of the University of British Columbia.

As the marsquakes continue, InSight should build a better picture of the subsurface geology beneath the spacecraft, as well what’s happening within the martian crust — and even deeper. NASA expects the lander to continue operating for another year.

The mission hasn’t been a complete success, however. One crucial instrument, a heat probe called the “mole,” was designed to hammer itself 16 feet down below the surface and reveal details about how rocky planets form. Instead, it’s been stuck for the last year. Teams of engineers around the world have worked with earthbound replicas of the spacecraft to test hacks that could free the instrument, but the mole keeps bouncing out of its hole.

Last week, NASA announced it would try to push on the mole’s top — a move the space agency had so far avoided over fears it could damage the instrument.