The flight of Gemini 7 required two astronauts be crammed into a tiny capsule and blasted into orbit. And there they stayed — physically disconnected from the rest of humanity — for nearly 14 full days. 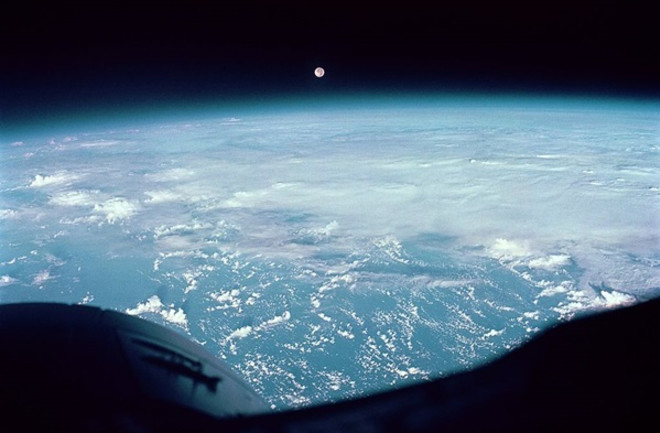 NASA astronauts Frank Borman and Jim Lovell captured this view of the distant Moon over Earth's horizon while orbiting in isolation for nearly two weeks during Gemini 7. (Credit: NASA)

Most of us will long remember the practice of social distancing to help slow the spread of COVID-19. But it’s also worth rewinding the clock 55 years to recount an even more extreme example of this practice —the flight of Gemini 7. Paradoxically, this NASA mission not only forced a pair of astronauts into extremely close quarters, it also required they practice social distancing at astronomical scales.

The mid-1960s were the very height of the Cold War. And one of the most publicized aspects of this conflict was the space race. NASA was in overdrive, trying to make progress on its own space efforts. But at the same time, NASA was attempting to leapfrog the Soviets, who had already made great strides in manned spaceflight.

This forced them to focus on the next major spaceflight milestone: the Moon.

The Path to Gemini 7

But when NASA engineers set their sights on Earth’s familiar satellite, they realized that a lunar flight would take as long as 14 days. This led physicians to raise serious concerns regarding whether the human body could endure microgravity for such a prolonged period of time. In early 1965, the record holder for longest spaceflight was Soviet cosmonaut Valery Bykovsky, who orbited Earth for about 4 days, 23 hours during the flight of Vostok 5. Then, in August 1965, Americans Gordon Cooper and Pete Conrad stole Bykovsky’s crown, orbiting Earth for almost eight days during the flight of Gemini 5.

Gemini 5 was largely a success, but NASA knew it still had to test whether astronauts could handle longer-duration spaceflights — and Gemini 7 was the mission chosen to do that. Gemini 7 allowed scientists to investigate the physical toll that extended periods of weightlessness takes on an astronaut, as well as work out practical challenges that a lunar mission would face, including prolonged confinement, resource management, and the handling and storage of waste (in all forms). The two-man crew of Gemini 7 would be crammed together like sardines, yet otherwise quarantined as their spacecraft orbited nearly 200 miles (320 kilometers) above Earth for almost two full weeks.

The 14-day flight of Gemini 7 was not intended to directly follow the eight-day flight of Gemini 5. But NASA delayed Gemini 6 — which eventually would be crewed by astronauts Wally Schirra and Tom Stafford — when the un-crewed spacecraft it was supposed to rendezvous with, an Agena target vehicle, catastrophically exploded shortly after its launch. As a result, NASA shifted gears and decided to launch Gemini 7 first, so that Gemini 6 would have a vehicle it could rendezvous with.

Gemini 7 would serve as both Frank Borman’s and Jim Lovell’s first trip to space. And because their flight was the fourth crewed Gemini mission, Borman and Lovell were assigned specially designed G5C spacesuits. These upgraded suits were more adjustable and featured soft helmets, but they were just as uncomfortable as the previous Gemini suits.

But the spacesuits weren’t the only problem.

This artist's concept of a Gemini capsule illustrates how little space the two-person crew had to move within the spacecraft. (Credit: NASA)

While the International Space Station (ISS) is relatively spacious, to say the Gemini capsule was cramped would be a major understatement. Although the entire Gemini spacecraft seemed large in comparison to its predecessor, the Mercury capsule, Gemini astronauts were confined to a small area in only one portion of the craft: the pressure hull of the reentry module.

The astronauts sat in single, forward-facing seats below two individual hatches. Unless the hatches were opened — as would be the case in the event of a spacewalk — the astronauts could not stand up or move around. Each astronaut had his own window, but they were only 6 by 8 inches (15 by 20 centimeters). And to make matters worse, when the hatch was closed, the windows were just a few inches from the astronauts’ faces.

All this to say that staying 6 feet (1.8 meters) apart, as with current social distancing recommendations, was just plain impossible; the men were rubbing shoulders, sharing every breath, sneeze, and cough. There also was very little storage space onboard, which meant the astronauts often stowed trash in their footwells or, more commonly, simply crammed it behind their seats. All in all, the interior of the Gemini capsule was only slightly larger than the front seat of a small car.

During the flight of Gemini 7, Borman and Lovell had plenty of work to do. They not only carried out many experiments, they also nailed their half of the rendezvous with Gemini 6, which flawlessly brought the spacecraft to within about a foot (30 cm) of each other. (The craft were not equipped to dock with one another.)

However, despite their heavy workload, Borman and Lovell also had both free time and housekeeping tasks. Eating, drinking, changing in and out of their spacesuits, and going to the bathroom consumed much of their days. Both men also brought books to read during downtime (Roughing it by Mark Twain for Borman; Drums Along the Mohawk by Walter Edmonds for Lovell). The men did literally everything — including washing and performing all bodily functions — in each other’s presence, as there was simply no alternative. For example, when Lovell lost his toothbrush early in the flight, the astronauts simply shared Borman’s for the rest of the trip.

Lovell likened the trip to “living in a men’s room.”

A helicopter plucks astronaut Jim Lovell from water after the Gemini 7 spacecraft splashed down in the Atlantic ocean following a 14-day spaceflight. Astronaut Frank Borman is also visible in the lifeboat below. (Credit: NASA)

By the end of the flight, both astronauts were ready to return to Earth. The excitement of the rendezvous had passed, they were sick of their spacesuits, and they had completed most of their scientific experiments. At this point, all that was left was to safely come home. With the spacecraft’s fuel almost spent and its batteries fading, Gemini 7 successfully returned to Earth on December 18, 1965, completing its two-week stint in space.

“Gemini was a tough go,” Borman said of the mission. “It was smaller than the front seat of a Volkswagen Bug. It made Apollo seem like a super-duper, plush touring bus.”

Although Gemini 7 was the first time two astronauts were essentially quarantined in space for 14 days, incidentally, subsequent NASA missions took social distancing to a new level. Al Worden, for example, spent three days during the Apollo 15 mission alone in the Command Module while his crewmates, Dave Scott and Jim Irwin, cavorted on the Moon. This famously made Worden the “most isolated human being” in history. At one point, when passing over the lunar farside, Worden reached a distance of some 2,235 miles (3,600 km) from his crewmates and 250,000 miles (400,000 km) from Earth.

More recently, beginning in 2015, astronaut Scott Kelly spent nearly a year aboard the ISS. Meanwhile, his long-term crewmate at the time, cosmonaut Gennady Padalka, has accumulated a total of 878 days in space over five missions. Then there is cosmonaut Valeri Polyakov, who spent a record-setting 437 straight days in space aboard the Mir Space Station in the mid-1990s.

These astronauts, however, generally had more company and free space aboard their vessels than did the crew of Gemini 7. For their 14 days in orbit, Borman and Lovell were truly on their own. And while not far from each other, they willingly (and greatly) distanced themselves from the rest of humanity. It was only during their famed rendezvous with Gemini 6 that the pair broke the 6-foot rule, and even then, they made sure to wear their PPEs — albeit for entirely different reasons.