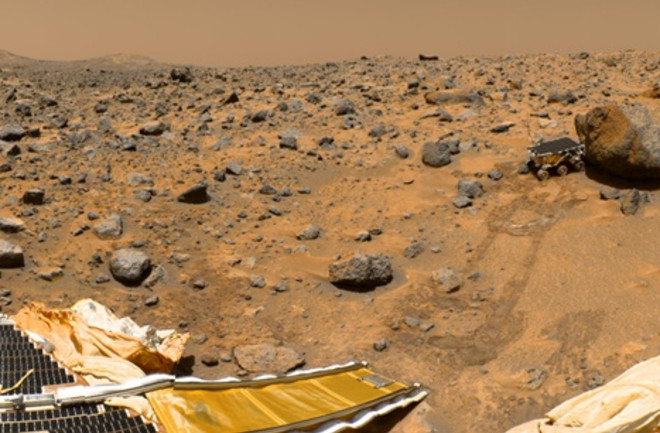 The Pathfinder mission landed in Mars' Ares Vallis, where the Sojourner rover catalogued rocks that may have been eroded by floodwaters. (Credit: NASA/JPL)

Mars may be a dry, cold planet today, but it was once a warmer, wetter one. NASA’s Opportunity rover was the first rover to find solid evidence of water on Mars — but years before Opportunity’s discoveries, NASA’s first Martian rover mission spent its time exploring an ancient spillway that once connected Mars’ northern ocean to an inland sea.

Mars Pathfinder landed 22 years ago, on July 4, 1997. The mission’s 23-pound (10.6 kilograms) rover, Sojourner, was the first rover to explore the surface of Mars, wheeling through Ares Vallis for 83 days. The mission investigated whether massive channels in the landscape, spotted by Mariner 9, were caused by floodwaters, as indicated from orbit. But the rover’s findings were inconclusive, leaving open the possibility that the shallow channels had been carved by lava instead of water. But that possibility is no longer viable, according to a paper published February 25 in Nature Scientific Reports, which states that the features Sojourner mapped are, in fact, the result of cataclysmic flooding on the Red Planet.

“Our paper shows a basin, with roughly the surface area of California, that separates most of the gigantic Martian channels from the Pathfinder landing site. Debris or lava flows would have filled the basin before reaching the Pathfinder landing site. The very existence of the basin requires cataclysmic floods as the channels’ primary formational mechanism,” said lead author Alexis Rodriguez of the Planetary Science Institute (PSI) in a press release.

The basin, according to Rodriguez, contains sedimentary rock consistent with deposits that would have been left by groundwater flooding, which formed an inland sea. “This sea is approximately 155 miles (250 kilometers) upstream from the Pathfinder landing site, an observation that reframes its paleo-geographic setting as part of a marine spillway, which formed a land barrier separating the inland sea and a northern ocean,” she said. “Our simulation shows that the presence of the sea would have attenuated cataclysmic floods, leading to shallow spillovers that reached the Pathfinder landing site and produced the bedforms detected by the spacecraft.”

According to the researchers, the ancient inland sea resembles the disappearing Aral Sea on Earth. “Our numerical simulations indicate that the [Martian] sea rapidly became ice-covered and disappeared within a few thousand years due to its rapid evaporation and sublimation. During this time, however, it remained liquid below its ice cover,” said co-author Bryan Travis, also of PSI.

Though its presence was brief, Rodriguez said the sea could have hosted life — and the deposits it left at the Pathfinder landing site could contain evidence of that life. That evidence could even be within reach, she added, as its location is “easily accessible by future missions.”

Are you ready to take a closer look at Mars? Check out our free downloadable eBook: Mars: Exploring the Red Planet.