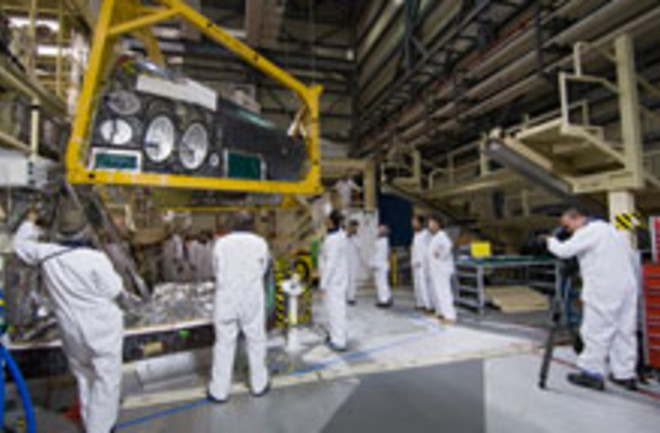 Flying high, NASA style! One of the space agency's employees seems to have been inspired by the space shuttle's soaring trajectory. A baggie containing a small amount of white powder residue, later found to be cocaine, was found at the Kennedy Space Center in Cape Canaveral, Florida. Way to go, NASA-employee-doing-coke-on-premises. You have forever altered our image of clean-cut astronauts standing around in space suits, chatting with diligent rocket scientists. But NASA is not so amused. According to CNN, Bob Cabana, the director of Kennedy Space Center, issued a terse statement that read in part:

"This is a rare and isolated incident, and I'm disappointed that it happened, but it should not detract from the outstanding work that is being done by a dedicated team on a daily basis."

About 200 employees and contractors have access to the restricted hangar where the drug was found, and they're now being being tested for the drug. For NASA, the incident is not just a blow to its image--the drug's presence in a restricted area also raises questions about the work done by NASA's elite workers. The hangar is being used to prepare for space shuttle Discovery's launch, which is scheduled for this March. The Internet, meanwhile, is tittering with amusement, with one reader commenting on a news article: "There's just so much coke in Florida, this bit probably just settled there, like pollen or something. Although! I think it makes for a great new sitcom idea. Miami Vice, Interstellar Unit!" Related Content: 80beats: NASA Considers Keeping Space Shuttles in Flight Past 2010 80beats: Cocaine Scrambles Gene's Behavior in the Brain's Pleasure Center 80beats: Pepper Spray and Cocaine Make Lethal Combo 80beats: One-Third of U.S. Cocaine Tainted with Dangerous Livestock DrugImage: Kennedy Space Center