NASA Tested the Parachute for its Mars 2020 Rover, Says it’s go for Launch 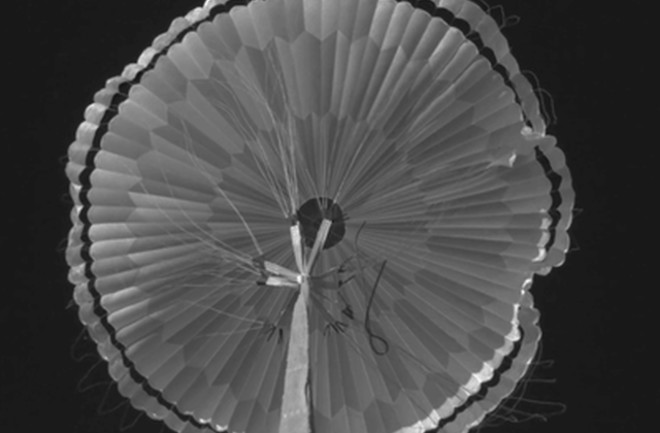 When the Mars 2020 rover arrives at the Red Planet, it will need a working parachute. Fortunately, in a record-breaking test performed last month, NASA confirmed that the parachute designed to carry the rover most of the way to the Martian surface is ready to do its job.

The test started with the launch of a Black Brant IX sounding rocket; less than two minutes after launch, the payload carrying the parachute separated from the rocket and began to fall back to Earth. As it passed a height of 24 miles (38 kilometers) at a speed of Mach 1.8 (1,380 miles per hour [2,200 kph]), the 180-pound (82 kilograms) parachute was released. And just four-tenths of a second later — the fastest inflation ever of a parachute this size — it had unfurled to its full diameter, creating a peak load of 67,000 pounds (30,000 kg) of force. That’s a second record: the highest load ever survived by a supersonic parachute.

And in a media release last week, Mars 2020 mission members confirmed that the nylon-Technora-Kevlar chute had passed all required tests and was ready to go.

Why all the excitement over a parachute? “Mars 2020 will be carrying the heaviest payload yet to the surface of Mars, and like all our prior Mars missions, we only have one parachute and it has to work,” said Mars 2020 Project Manager John McNamee of NASA’s Jet Propulsion Laboratory (JPL) in a press release. That’s why the peak load tested was also about 85 percent more than researchers expect to need during the real landing on Mars.

Testing a parachute meant for another planet here on Earth is tricky, but not impossible as long as you choose the right conditions. “Earth’s atmosphere near the surface is much denser than that near the Martian surface, by about 100 times,” explained JPL’s Ian Clark, the test’s technical lead. “But high up — around 23 miles (37 km) — the atmospheric density on Earth is very similar to 6 miles (10 kilometers) above Mars, which happens to be the altitude that Mars 2020 will deploy its parachute.”

The parachute may be ready to go, but it’s only one part in the rover’s landing system. Like the Curiosity rover before it, Mars 2020 will utilize a descent vehicle and a sky crane that will hover above the surface and lower the rover the rest of the way to the ground. Such a procedure, while complex, allows mission members to set the heavy rover on the surface much more precisely than a parachute alone. Given the recent debate on the rover’s landing site, nailing that landing is extremely important.

In addition to its new, stronger parachute, the mission will also carry a package of new entry, descent, and landing technologies, including systems that will allow the rover to divert around difficult or hazardous terrain on its way through the Martian atmosphere to the surface.

“We are all about helping 2020 stick its landing 28 months from now,” said Clark.