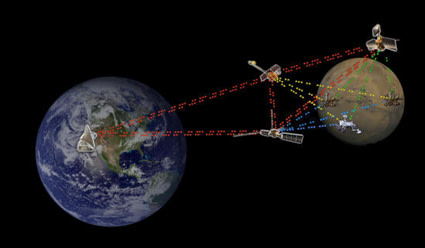 NASA engineers have finally tested an "interplanetary Internet" that could be crucial for future communications with rovers and astronauts exploring the moon, Mars, or other planets. NASA says the system would rely on probes and orbiters to serve as relay stations, or routers, to send communications around the solar system.

The space agency has been working for 10 years on the project with Vint Cerf, one of the Internet's key inventors and now chief Internet evangelist for Google [AP].

The protocols (the language computers use to speak to each other) used for our terrestrial Internet won't work for deep space, because they assume that the network's nodes will be connected continuously, and that messages will travel swiftly. But communication between objects in space are frequently disrupted by solar storms and obstructing planets, and sending a message from Earth to Mars can take up to 20 minutes. So engineers at NASA's Jet Propulsion Laboratory worked with Cerf to come up with a new protocol, called Disruption-Tolerant Networking (DTN).

With the new communications design, each network node is designed to hold onto data packets, instead of discard them, until a destination path can be found. "The incentive to use Internet-like protocols over space links was to take advantage of automated routing," [said NASA's Leigh Torgerson]. "With standard space-link communications, the ground sends commands to spacecraft to tell it what time and what data to send. It's very hands-on-intensive" [Computerworld].

Hooke said the protocol has been used by Laplanders herding reindeer on snowmobiles, as well as cell-phone users on the bleeding edges of their coverage areas. It's even being deployed by the Pentagon for battlefield communications. "There's quite a community now, the happy band of delay-tolerant networkers," Hooke told me [MSNBC].

Then, this October, NASA tested the system using

the EPOXI spacecraft, currently on a two-year outbound cruise to a comet rendezvous. The spacecraft is in communication, using DTN, with nine ground stations at the JPL, designed to simulate a Mars relay network with orbiters, landers, and earthbound nodes [Ars Technica].

From 20 million miles away, the spacecraft sent back images without any hitches, officials say. Related Content: DISCOVER: The "Father of the Internet" Would Rather You Call Him "Vint" DISCOVER: Is It Time to Chuck the Internet and Start Over? DISCOVER: Map: What Does the Internet Look Like?Image: NASA/JPL