Engineers hid the phrase “Dare Mighty Things'' on the parachute of NASA’s Mars Perseverance rover. It isn’t the first time they’ve snuck a fun surprise or a sentimental object onto a spacecraft, either. 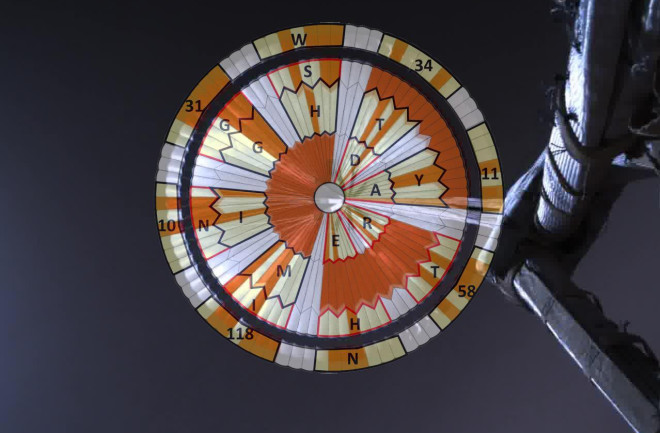 On February 18, NASA’s Perseverance rover landed on Mars, ready to embark on a mission to search for signs of ancient alien life. And as the rover descended to the Martian surface, its parachute deployed, revealing a striking red and white pattern that mystified space fans when NASA released the descent images.

“Sometimes we leave messages in our work for others to find for that purpose, so we invite you all to give it shot and show your work," said NASA’s Allen Chen, lead engineer for Entry, Descent, and Landing Systems, during a press conference.

It didn't take long for internet sleuths to decipher the hidden message, posting the answer online within hours.

It turned out, the parachute’s strange pattern was actually a binary code message that spelled the phrase “Dare Mighty Things” — the motto of NASA's Jet Propulsion Laboratory’s motto — as well as listed the lab's GPS coordinates.

The hidden message comes from a longer Teddy Roosevelt quote, which reads:

"Far better is it to dare mighty things, to win glorious triumphs, even though checkered by failure ... than to rank with those poor spirits who neither enjoy nor suffer much, because they live in a gray twilight that knows not victory nor defeat."

In nerdom, this kind of hidden message is called an Easter egg. The term pops up commonly in video games and software. The first commonly accepted Easter egg appeared in the 1980 Atari video game, Adventure, after the game’s disgruntled programmer hid his name inside the game. Players could only find it if they went to the exact right place. Since then, the term has spread across popular culture, with Easter eggs referring to anything from hidden objects to inside jokes to extra features. NASA takes this playful tradition to another level, placing Easter eggs not in virtual worlds, but literally on other planets within our solar system. Secret messages like the one on Perseverance's chute serve as recent examples. However, NASA is also no stranger to attaching sentimental mementos to spacecraft, from New Horizons carrying Clyde Tombaugh's ashes and Voyager carrying its Golden Record to Juno's stowaway Lego figurines and the unofficial experiments Apollo astronauts brought to the Moon.

And in recent years, NASA and JPL have turned planting Easter eggs on Mars into something of a tradition.

This meteorite was ejected from Mars millions of years ago and traveled the solar system until it crashed onto Earth and was recovered by humans. Then, NASA eventually sent it on a round-trip visit to the International Space Station before returning a piece of it to Mars on the Perseverance rover. (Credit: NASA/JPL-Caltech /LANL/CNES/ESA/Thomas Pesquet)

It turns out, the Perseverance rover is packed with a lot more hidden features than just a cryptic parachute. Over the past week (and before landing, too) NASA has been revealing a number of fun little mementos stashed onboard the rover, such as a family portrait of previous rovers. Perhaps the most poetic, though, is a tiny piece of the Red Planet itself — one that slammed into the Earth's surface after being blasted from Mars eons ago.

Perseverance was built to search for signs of life on Mars. And one of the main ways it will do that is by using its SuperCam instrument. SuperCam sits on the end of Perseverance's long-necked mast and uses a combination of a camera, laser and spectrometer to hunt for organic compounds that may hold evidence of ancient Martian life.

So, it's only fitting that one of SuperCam's calibration targets contains a piece of a Martian meteorite that's finally making its way back home. NASA also sent the meteorite sample to the International Space Station for a time before slicing off a piece for Mars. That's a long, strange trip for a space rock.)

NASA's JPL stashed a message in braille on the Mars InSight Lander's camera calibration target. You can make it out n the far left and right of the frame, beyond the colored dots. (Credit: NASA/JPL-Caltech/Lockheed Martin Space)

On every mission before NASA's InSight Lander touched down in 2018, the space agency had studied things that could be seen on the surface. But InSight took a different approach. It was designed to tune into the rumbles of marsquakes, as well as dig beneath the surface to feel out what was buried below.

So, it was only fitting that the Jet Propulsion Laboratory hid a message in braille on the Mars InSight Lander. Like Perseverance's parachute, the braille message carries JPL's initials. The frame that holds it, which is decorated with flags, logos, colored dots, and other unique targets, is designed to be used to test and calibrate the lander's sensitive cameras. Yet the existence of the braille message slipped by the public until the lander was already on Mars.

The six wheels of the Mars Curiosity rover leave an imprint in the dirt in Morse code that reads "--- (J), .--. (P), and .-.. (L)" after JPL, NASA's Jet Propulsion Laboratory where the spacecraft was built. (Credit: NASA/JPL-Caltech)

When NASA's Mars Curiosity rover landed on Mars back in 2012, it was far bigger than any other rover that had come before it. The difference was especially obvious in the spacecraft's wheels, which looked like monster truck tires compared to those on the relatively diminutive Sojourner rover. That's why space fans back on Earth were quick to analyze the strange tire marks Curiosity left behind after its first test drive on the Red Planet.

It turns out, mission planners had imprinted the rover's six wheels with a message in Morse code that reads "--- [J], .--. [P], and .-.. [L]." JPL is short for NASA's Jet Propulsion Laboratory, where the spacecraft was built. However, this wasn't just a fun way for engineers to write their names in the former beach sands of Mars. Instead, the imprints occur at regular, well-defined intervals, which helps managers back on Earth keep track of the exact distance each wheel travels. That way, they can monitor if any wheels are slipping in steep or loose soil.

Engineers at Honeybee Robotics in Manhattan were working on a key feature of NASA's Opportunity and Spirit rovers when terrorists attacked the World Trade Center less than a mile away on September 11, 2001. And with the spacecraft's launch deadline swiftly approaching, the employees couldn't spend much time helping in the recovery effort. They had to keep building the rovers' Rock Abrasion Tool, a grinding instrument that would let the spacecraft peel back weathered layers of samples to study what was beneath.

So, working together with JPL engineers, the team found another way to pay tribute. Honeybee Robotics networked with the New York City mayor's office and secured an aluminum piece of wreckage that they repurposed into identical cable covers for both rovers. And each piece was adorned with an American flag.

The rovers completed their initial 3-month missions on Mars in early 2004, but no one from NASA, Honeybee, or the rover teams mentioned the World Trade Center connection until much later in the year.

"It was meant to be a quiet tribute," Stephen Gorevan, a Honeybee founder and Mars rover team member eventually told The New York Times. "Enough time has passed. We want the families to know."

Both Spirit and Opportunity have now shut down, though Opportunity pressed on until a 2018 global dust storm engulfed it. Yet, without significant weather eroding the spacecraft, their metal frames will likely survive for millions of years, creating a permanent memorial on Mars to the lives lost during the World Trade Center attack.

A similar memorial was also tucked away on Perseverance: The rover carries a memorial to healthcare workers and those lost during the COVID-19 pandemic. Thanks to the hints of JPL engineers, we know Perseverance's known Easter eggs aren't the last. The latest rover is still hiding more secrets — and these are expected to be revealed in the coming weeks.