Moon dust is a major problem for astronauts, but a simple coating could ward off damage. 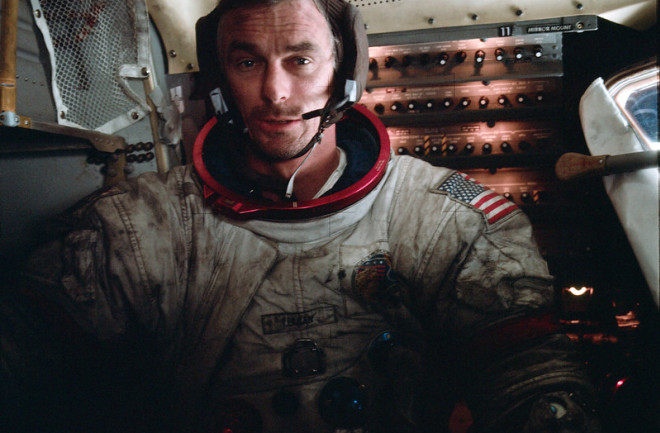 Gene Cernan returned from a moon walk during Apollo 17 covered in lunar dust. Without the elements to wear on it, moon dust holds onto sharp edges and can cause a wide range of problems for astronauts and their equipment. (Credit: NASA)

There are many challenges in the pursuit of establishing a long-term human presence on the moon. But one of the biggest challenges is actually one of the smallest: dust.

According to Apollo 17 astronaut Harrison “Jack” Schmitt, “Dust is going to be the environmental problem for future missions, both inside and outside habitats.”

But now, NASA may have a solution to keep the dust blanketing the moon from hindering our efforts to live and work there. Lunar dust, the Apollo astronauts learned, gets everywhere. Its jagged shape can scratch delicate spacesuit surfaces, while its dark color absorbs sunlight, overheating vital electronics. Breathing it in can even incite hay fever-like symptoms when astronauts return from moon walks and shed their dust-covered spacesuits. But a new paint-on coating initially designed to protect orbiting satellites might soon also be used on everything moon-bound.

In one of humanity's final moments on the moon, Apollo 17 astronaut Harrison Schmitt captured Gene Cernan as he tried to shake off the moon dust. (Credit: NASA)

As satellites fly through Earth’s magnetosphere, particles trapped in the plasma there build up on sensitive surfaces. As the charged particles accumulate, their combined charge can be potentially mission-ending for the satellite’s components.

To combat the problem, researchers at NASA's Goddard Space Flight Center and the University of Maryland have developed a coating of indium tin oxide, which is good at dissipating electrical charges. Using a process called atomic layer deposition, they can deposit extremely thin — one atom thick — layers of indium tin oxide onto pigments that then go into paint. When painted onto vulnerable spacecraft surfaces, the coating should protect the electronics from damage.

Several coated wafers are currently aboard the International Space Station, being exposed to plasma before they are returned to Earth later this year for analysis. And, if successful, the coating could go on to protect not only circling satellites, but humanity’s future lunar efforts.

Lunar dust and the damage it can cause was a major concern for the Apollo astronauts. In fact, it was such a concern that the astronauts were instructed to stop and clean off the Lunar Roving Vehicle (LRV) at regular intervals to prevent dust damage to the electronics. That took valuable time away from already-limited lunar excursions.

When the LRV lost one of its dust-busting fenders on Apollo 17, the astronauts had to make a new, jury-rigged fender out of laminated maps and duct tape to prevent the vehicle from kicking up excessive amounts of dust for the rest of the mission.   And to make its damaging qualities worse, lunar dust is charged. On the dayside, ultraviolet radiation from direct sunlight gives lunar dust a net positive charge by knocking off electrons. On the nightside, plasma from the sun instead deposits electrons, leaving the surface with a net negative charge. And anything sent from Earth — be it astronauts, rovers or construction materials — also carries its own charge.

These charges can cause dust to not only quickly build up on astronauts and their equipment, but also potentially generate electronics-harming electrical fields. A simple paint coating would be an elegant and easy solution to this major hurdle. If the ISS test is successful, the team said, the next step could be building a system to deposit indium tin oxide onto more pigment at once. This will increase the amount of the coating they can produce for future testing on spacesuits, rover surfaces and more.