NASA is Sending a Helicopter to Mars 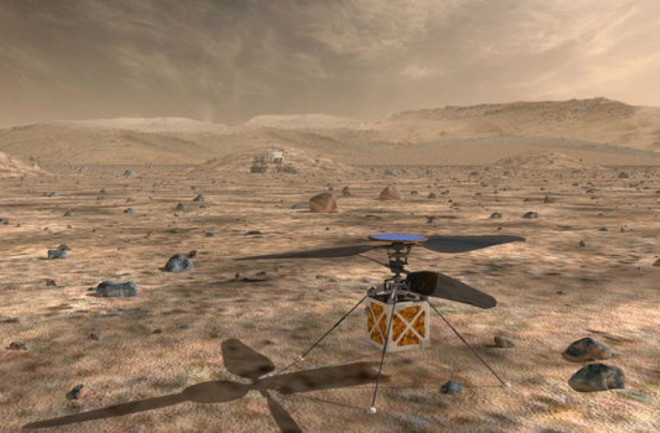 The Mars Helicopter will launch with NASA’s Mars 2020 rover and should arrive on the Red Planet in early 2021. (Credits: NASA/JPL-Caltech)

When the Mars 2020 rover lands on the Red Planet in early 2021, it will carry with it a small helicopter, the first human craft to fly on another planet. Until now, Mars has hosted orbiters, landers, and rovers, but no flying machines. The Mars helicopter is meant only as a technology demonstration. If it doesn’t work, the Mars 2020 mission will still succeed. If it does, it will have opened up entirely new avenues for exploring other worlds.

Into the Wild Red Yonder

While helicopters are old technology on Earth, flying one on Mars will be challenging. Thanks to Mars’ thin atmosphere, a helicopter flying just above the surface is already at the equivalent of 100,000 feet Earth altitude, far beyond where helicopters or even typical planes fly. The altitude record for a helicopter on Earth is only 40,000 feet. And even consumer drones on Earth can struggle at high altitudes.

So NASA engineers at the Jet Propulsion Laboratory had to make a craft that was both incredibly light and incredibly strong. They think they’ve succeeded: the resulting chopper is only about the size of a softball, and weighs 4 pounds. Its rotor blades will spin at 3,000 rpm, 10 times faster than most Earth choppers. The team has been working on the project since 2013 as a technology demonstration, though it wasn’t approved for the Mars 2020 mission until May of 2018.

Aside from the challenge of flight itself on the Red Planet, engineers also had to figure out how the craft would navigate with communications delays of at least a few minutes between Mars and Earth. Engineers solve this problem with the rovers by taking careful pictures of the terrain and then guiding the rover slowly toward its goals, with many stops along the way to reassess any risks. But a helicopter needs faster response times, being more likely to encounter wind patterns and other obstacles that could knock it off course. And of course, if the rover ever malfunctions and stops operating, it will still be safely on the ground. The helicopter must have built-in systems to safely land itself if it encounters any errors.

So the Mars Helicopter will be autonomous, flying itself on short flights. It will receive commands and communicate via the rover, but has its own solar powered batteries for power and a heater to keep it warm on cold Martian nights.

Its mission will last for 30 days and include five flights. At first, these will be simple hovering tests just 10 feet off the ground. It will work up to longer flights lasting 90 seconds.

If the helicopter is successful, NASA hopes that future versions could be used as scouting missions for other rovers, or to image regions inaccessible to a wheeled explorer.