A Type I X-ray burst from a star generated a burst of X-rays more extreme than astronomers had ever seen before. 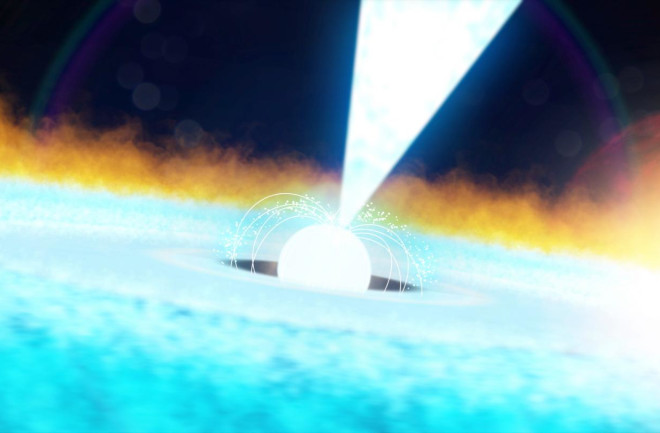 In late August, an instrument on the International Space Station, called NICER, spotted its brightest burst of X-ray radiation yet.

NICER, or the Neutron Star Interior Composition Explorer, studies X-rays that come from neutron stars, the super-dense remnants of some stars after they go supernova. This particular burst came from a neutron star called SAX J1808.

The burst was extremely energetic, releasing about as much energy in 20 seconds as the sun does in 10 days. Aside from being incredibly bright, the burst had a combination of features that astronomers hadn’t seen together in a single event. This made the event a valuable opportunity to study and better understand the physics behind these X-ray bursts. A team of astronomers that studied the burst reported its findings in a recent paper in The Astrophysical Journal Letters.

NICER observes X-ray bursts from neutron stars in binary systems where a neutron star and another object orbit each other. SAX J1808, for example, is partnered with a brown dwarf, an object somewhere between a star and a gas giant planet.

The neutron star pulls hydrogen gas from the companion object into a swirling disk around it. These gases can also fall inward from disk to neutron star, sometimes triggering explosions that detectors like NICER see as bursts of X-rays.

In the August burst, the astronomers saw evidence that the explosion blew material off of the neutron star in two layers. A layer of hydrogen was likely ejected first, followed by a layer of helium. NICER had previously seen neutron stars give off X-ray bursts that corresponded to either hydrogen or helium layers, but not both in a single burst like this, said Peter Bult, an astronomer at NASA’s Goddard Space Flight Center and one of the authors of the paper.

Another feature the astronomers saw was fluctuations in brightness throughout the burst. This was probably from the neutron star rotating so that hotter and cooler sides of it faced the detector. They also saw something for which they don’t yet have an explanation: SAX J1808 got brighter again after the main part of the burst.

Seeing evidence for multiple phenomena happening in a single event means the researchers can investigate whether they are related.

“I’m most excited by the fact that we see these various phenomena in the same burst,” Bult said. “I think with this burst, we might have a really good shot of getting more into the specifics of what might cause this re-brightening.”