NASA Finds Shrimp Where No Advanced Life Should Be: 600 Feet Beneath Antarctic Ice 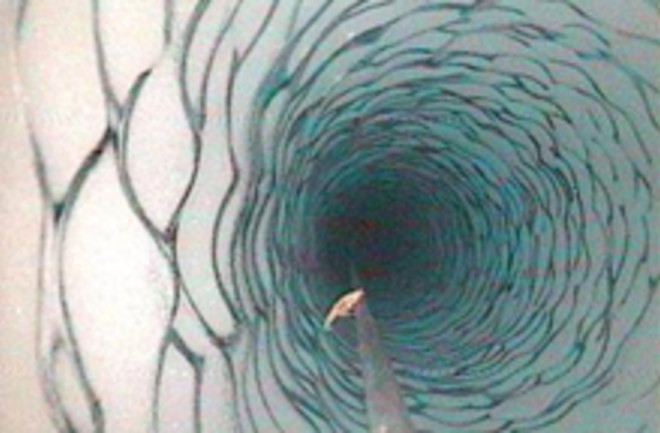 There's a lot more going on beneath those huge sheets of Antarctic ice than you might think. NASA researchers say they uncovered a major surprise in December: The team

drilled an eight-inch hole and stuck a video camera 600 feet down, hoping to observe the underbelly of the thick ice sheet. To their amazement, a curious critter swam into view and clung to the video camera's cable [Washington Post]

. The three-inch crustacean in their video (and pictured in the image here) is a Lyssianasid amphipod, a relative of a shrimp. The team also retrieved what they believe to be a tentacle from a jellyfish.

"We were operating on the presumption that nothing's there," said NASA ice scientist Robert Bindschadler, who will be presenting the initial findings and a video at an American Geophysical Union meeting Wednesday. "It was a shrimp you'd enjoy having on your plate" [AP]

. Indeed, researchers previously believed that nothing more complex than microbes could live in such a hostile place, beneath an ice sheet in total darkness. While complex organisms have shown up before in retreating glaciers, this seems to be the first time any have been found 600 feet down below an intact sheet of ice. The sheer unlikeliness of the find (what would these creatures eat, after all?) cast doubt in the minds of some scientists that this is the organisms' true habitat. The site is connected to the open sea, says Cynan Ellis-Evans of the British Antarctic Survey. But given the distance to that open sea—12 miles–study coauthor Stacy Kim says it's highly unlikely such small creatures made such a journey under an ice sheet. In addition, the hole NASA drilled measured only eight inches across.

That means it's unlikely that that two critters swam from great distances and were captured randomly in that small of an area, she said [AP]

. If crustaceans really can tough it out buried beneath the ice, perhaps complex organisms can live in more places than we give them credit for. Astrobiology enthusiasts are probably already thinking of the ice-covered moons in our solar system, like the Jovian moon Europa and the Saturnian moon Enceladus, and wondering whether extraterrestrial critters could be lurking beneath those frozen surfaces. First, though, there's a lot left to sort out about this intriguing puzzle.

Related Content: 80beats: An Iceberg the Size of Luxembourg Breaks Free from Antarctica 80beats: Is the Once-Stable Part of Antarctica Starting to Melt? 80beats: Fossils of Shrimp-Like Creatures Point to Warmer Antarctica in the Distant Past 80beats: Floods Beneath Antarctica’s Ice Sheet Create a Glacial Slip-and-SlideImage: NASA