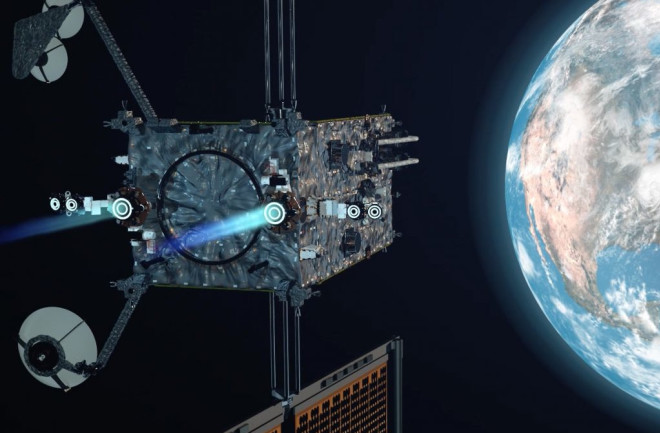 The power and propulsion system for the Lunar Gateway will be built by Maxar. (Credit: Courtesy, Business Wire)

In a talk at the Florida Institute of Technology on Thursday, NASA administrator Jim Bridenstine announced that Maxar Technologies will build the first stage of NASA’s planned Lunar Gateway.

The Gateway, part of NASA’s larger Artemis program to return to the moon, is meant to be a waystation of sorts placed in a long orbit around the moon. It will provide a habitat for astronauts while they prepare to embark on longer missions, including moon landings, and serve as a place to assemble the components of rockets and other equipment in space.

The first element to be built and tested is a propulsion system, to move it between orbits and make sure it doesn’t drift away. Maxar (a new company formed from several veteran space industry players) is being awarded up to $375 million to build the system, which will convert solar power to electrical energy to power the Gateway, as well as provide propulsion, communication, and docking capabilities.

Getting the first stage of the Lunar Gateway into place is an important pre-requisite for NASA’s plans to land humans on the moon by 2024.

Following on a directive from the White House to return America to to the moon, Bridenstine also laid out NASA’s detailed plans for the next five years of launches culminating with a moon landing in 2024. That includes three launches as part of the newly-named Artemis program. The first will be an uncrewed test flight for the still-to-be-completed SLS rocket and Orion crew capsule, the second a crewed flight to lunar orbit, and a third to dock with the Gateway and land humans on the moon.

Fellow space companies Blue Origin and Draper will aid Maxar in developing the system, with Blue Origin providing expertise in systems that will affect human explorers, and Draper handling navigation and orbital trajectories.

Maxar will build their system on solar electric propulsion (SEP), which turns solar energy into both electrical and propulsive power. Solar panels turn sunlight into electricity, which is stored in batteries, just as in other solar arrays.

But the system turns that sunlight into propulsion as well. Rather than rely on chemical propellants, which add significant weight and is explosive by nature, SEP feeds energy into Hall thrusters. These futuristic engines use electricity to ionize gases like xenon or argon, shooting them out the back of the spacecraft to provide thrust.

As part of the SEP system, Maxar has already developed a Roll Out Solar Array (ROSA) that, as its name implies, rolls out like a carpet instead of the more traditional accordion-like unfolding of most space-based solar arrays.

The thrusters will be critical to Gateway’s ability to move from one orbit to another. NASA’s ultimate goal for the station is to enable travel not just to the moon, but to Mars and other deep-space destinations. Those missions would require it to fly at different orbits depending on where the astronauts might be going.

And while the Gateway is being built up, NASA will also be relying on commercial partners to develop and deliver refueling, landing and ascent vehicles that can be waiting when Orion docks with the Gateway in 2024. The agency recently announced 11 companies that will be vying to deliver those spacecraft.

NASA also plans a slew of smaller launches, as part of the CLPS program, with payloads in the 15-20 pound range, delivering science experiments to the lunar surface as soon as next year. These projects will fly commercially, and test systems ranging from manufacturing to communications to power on the lunar surface, to prepare for the human explorers who will follow.

NASA is leaning hard on private contractors to deliver technology for most parts of Artemis. While SLS and Orion are NASA-led projects (although also built and delivered by contractors), the lander, ascent, and now power and propulsion systems are all being built independently. NASA hopes to transition to a model where it’s no longer owning hardware, but buying services when it comes to some elements of space travel, Bridenstine emphasized. That means relying on outside vendors to develop fully capable spacecraft.

The administration asked for an additional $1.6 billion to jump-start the Artemis program, but has not yet specified a total cost. The budget that emerged from the House Appropriations Committee on Wednesday did not allocate these additional funds, though they did restore other money the administration had cut for education and various science missions. The budgeting process is still underway, and the Senate must still deliver its own version of the budget. It’s unclear what will happen to NASA’s 2024 plans without the funding to support them.