NASA & ESA Home in on Jupiter's Moons Looking for Life 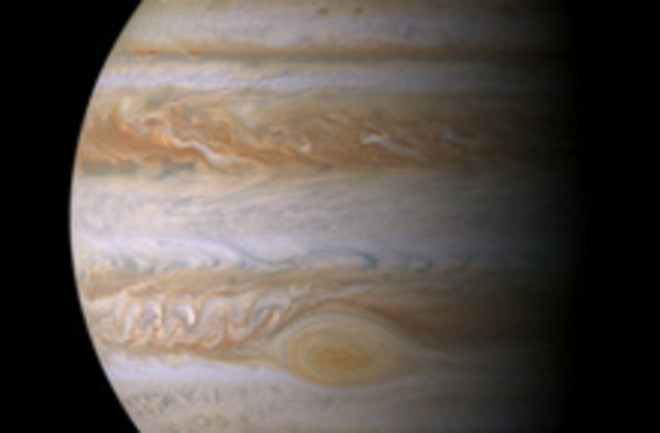 The next stop in the search for life in outer space will be Jupiter’s ice-covered moon Europa. NASA announced plans on Wednesday to launch a probe to the moon in 2020, a mission that could cost $3 billion and

will focus on the possibility that in the gigantic ocean thought to be hidden under the moon's thick cover of ice is a habitable zone where rudimentary forms of life could exist.... What makes Europa so important, said Robert Pappalardo, a senior research scientist at [NASA], is that "icy satellites are the most common potentially habitable environment in the outer solar system," and therefore could be common throughout the universe. Understanding how they function, and whether they are indeed a good home for life, is key to answering the "are we alone" question"

[Los Angeles Times]. After years of debate over the destination for NASA’s next flagship mission, the agency finally homed in on Europa, the smallest of Jupiter’s four large moons, because the mission would be easier to accomplish than other moons of interest orbiting Jupiter or Saturn. The mission will seek to “produce a global map in preparation for a journey many years in the future that would land on the moon. Using radar and other devices, the probe will try to verify the thickness of the ice sheet and determine the presence of the ocean covering the 2,000-mile diameter moon. "Europa is tremendously exciting," said Jim Green, director of the Planetary Sciences Division at NASA. "It may have more water underground than the Earth" [Los Angeles Times]. NASA's Europa mission will also have a partner in exploration: The European Space Agency is sending a separate but related probe to Ganymede, Jupiter’s largest moon. "It's a double integrated mission. What we want to do with two platforms is to contemplate the Jupiter system as a whole—each platform looking at specific objects; and the two platforms looking at the same objects from two different perspectives," said Michel Blanc, from the CESR (Centre d'Etude Spatiale des Rayonnements) in Toulouse, France [BBC]. The probes will be launched in 2020, and after a six-year cruise, they'll arrive at Jupiter and begin to tour a number of the moons. After two and a half years, NASA's probe will go into orbit around Europa, and ESA's probe around Ganymede [Washington Post]. The two orbiters would end their missions by crashing into their respective moons [BBC]. Related Content: 80beats: Saturn and Jupiter’s Moons Battle for Alien-Hunters’ Attention Bad Astronomy: Venus, the Moon, and Jupiter