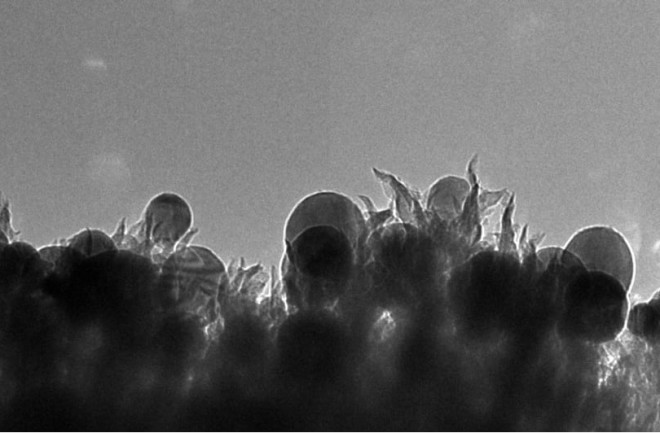 A microscopic image of the carbon nanospikes created by the researchers. (Credit: ORNL) A new chemical process turns carbon dioxide into ethanol using commonly-found catalysts and electricity. In a sense, they've figured out a way to put the genie back in the bottle. The alchemic process of converting greenhouse gases into usable energy is an appealing means of both addressing climate change and providing sustainable sources of energy. Converting carbon dioxide into energy and other useful products has been done before, but the process isn't efficient or cheap enough to implement at a large scale. Researchers from the Oak Ridge National Laboratory, however, say that they have found a chemical reaction that produces hydrocarbons using just copper as a catalyst, and they say it's quite efficient.

The key to their method is how the copper is arranged. First, the researchers create a scaffold made from carbon and nitrogen. The surface is covered in tiny spikes, each about 50 nanometers high. The researchers then deposit copper particles onto the surface, which acts as a catalyst for the reaction. When electricity is run through the material, the reactions are concentrated at the very tips of the spikes, they say, providing the energy required for carbon dioxide dissolved in water to break apart and reform as ethanol. They liken to process to running a combustion reaction, where ethanol is broken up in the presence of oxygen to create CO2 and other molecules, backwards. The reaction achieved an efficiency of 63 percent when creating ethanol, using a power supply of just 1.2 volts at room temperature. The researchers published their work last month in Chemistry Select. Copper is a common catalyst for these kinds of reactions, but it was usually only able to form lighter hydrocarbons, and the reactions usually yielded more than one product, making it difficult to use for large-scale processes. The Oak Ridge researchers' process, however, yields mostly ethanol, thanks to the unique structure of their nanospikes. Still, it's a technique that's far from industrial scaling.

Turning carbon dioxide into ethanol won't solve global warming, of course. When we burn the ethanol, it will turn into carbon dioxide again, leaving us right back where we started. Making our own ethanol is better than pulling it out of the ground though, and could help level off our net carbon emissions. The researchers also suggest that it could function as a kind of battery for electrical grids. If a grid is producing excess power at any time, the extra electricity could be used to fuel this process, creating ethanol. When power is needed, the ethanol could be used as fuel to again create electricity. Even such a process still consumes electricity, though, and the researchers say more work needs to be done to further understand the process and make it even more efficient. It may not be nuclear fusion, but making our own hydrocarbons is an important step towards weaning us off the limited natural stores of fossil fuels that currently power our civilization.