Mysterious Stellar Blast in the 1840s Was a "Supernova Imposter" 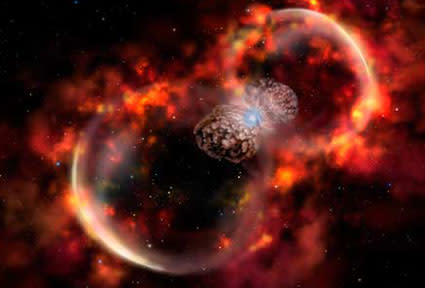 A remarkable stellar event that mesmerized astronomers in 1843 may have been a previously unknown kind of explosion, researchers say. That explosion, which made the star Eta Carinae one of the brightest in the Southern sky, could have been the precursor to the star's expected explosion into a supernova. Researchers began watching Eta Carinae after the star mysteriously brightened 1843, and

astronomers in recent decades have photographed and studied the resulting cloud of gas and dust, known as the Homunculus Nebula, that billows away from the star. A farther-out faint shell of debris from an earlier explosion is also visible, probably dating from around 1,000 years ago. "Looking at other galaxies, astronomers have seen stars like Eta Carinae that get brighter, but not quite as bright as a real supernova," said [lead researcher] Nathan Smith.... "We don't know what they are. It's an enduring mystery as to what can brighten a star that much without destroying it completely" [SPACE.com].

Astronomers previously believed that the bright clouds of gas were a result of solar winds pushing out the star's outer layers, but the new study, published in Nature [subscription required], argues against that hypothesis. Smith discovered filaments of gas produced by the 1843 outburst that were traveling faster than the solar wind could have propelled them, suggesting that they're the result of a powerful interior explosion.

Unlike a wind-driven event, an explosion “implies that there is some sudden burst of energy deep inside the star,” Smith says. “It may be related to the rate of fuel consumption as a massive star nears the end of its life” [Science News].

Smith suggest that these events may be a natural step in the death of a star, in which it sheds some of its mass before the final supernova. DISCOVER's article "X-Ray Vision" has X-ray images of Eta Carinae, pulsars, supernovae, and other cosmic marvels. Image: Gemini Observatory, Lynette Cook