The earliest mummies reveal how culture and climate created the world’s first state. 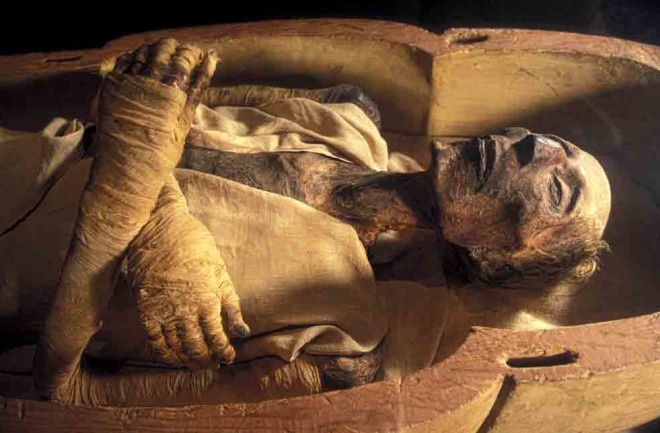 Mummification in ancient Egypt was at its height when Ramses II (above) reigned during the second millennium B.C., but the practice was established 3,000 years earlier. Patrick Landmann/Photo Researchers/Science Source

Pyramids and pharaohs: iconic images of ancient Egypt, but what came before the massive tombs and elaborate burials? New analysis of old evidence is shaking up conventional thinking about how early, how quickly and even why prehistoric nomadic societies coalesced into the world’s first formal state. A key to understanding the surprising new chronology of ancient Egypt’s foundation can be found in tiny, “toffee-like” shards of material, some of which are more than 6,000 years old. In 2014, researchers rewrote the timeline for mummification — moving its start back in time by millennia — when University of York archaeological chemist Stephen Buckley analyzed several fragments of funerary textiles and reed matting dating from 4500 to 3350 B.C. The fragments spanned two key periods in prehistoric Egypt: the Late Neolithic, or Badarian period, and the Predynastic, or Naqada period. The material, excavated in Egypt in the early 20th century, was residing in the Bolton Museum in northwestern England. The fragments were significant because the location, and the archaeological context in which they were found, had been accurately recorded — a rare find for material this old. Using gas chromatography-mass spectrometry (GC-MS), Buckley hoped to succeed where two previous attempts by chemists had failed: to extract and identify the components of a dark golden-brown substance that had been applied to the funerary fabrics in preparation for burial.

Neolithic-era funerary textiles impregnated with resin look like toffee to the naked eye. Ron Oldfield and Jana Jones/University of York

“GC-MS is great for separating out a complex mixture into individual compounds and then giving you a fingerprint of each separated compound,” Buckley says, acknowledging his work was still difficult due to contamination by 20th century materials applied during conservation work.

The structure of the funerary textiles is revealed under 150x magnification. Ron Oldfield

What Buckley’s analysis revealed surprised even him. The components of the toffee-like material, and their relative proportions, were nearly the same as the recipe of a mixture applied to textiles during mummification at the height of the practice in Egypt, around 1500 to 1000 B.C. In addition, certain ingredients, such as resin from coniferous plants, showed evidence of being heated and processed before application, confirming that collecting, making and applying the concoction were intentional acts, not merely an accident of nature or guesswork. “They had an understanding of empirical science. They were conducting experiments and making observations,” says Buckley. The study Buckley and colleagues published in the journal PLOS One showed that mummification was established much earlier in Egypt than we knew — as early as 4300 B.C., during the Badarian period, rather than about 2500 B.C., after the foundation of the Egyptian state, as previously thought. The findings also complement a new and more precise chronology for ancient Egypt, published in 2013 by another group of researchers. That chronology revised the time of the shift between two prehistoric periods — a crucial transition between earlier nomadic herding societies of the Badarian and the later Naqada society, settled and practicing intensive agriculture in the Nile Valley, that would give rise to the Egyptian state.

When estimating the course of events in prehistoric Egypt, archaeologists traditionally had worked with a relative chronology based on the evolution of pottery styles. That conventional approach had established that the nomadic societies of the Badarian period transitioned to the agriculture-based settlements of the Naqada period about 4000 B.C. In 2013, however, a multidisciplinary team took a new look at — and applied a new method to — existing archaeological evidence. Researchers combined radiocarbon dating with statistical modeling to create an absolute chronology that was less subjective than previous timelines. They pinpointed the start of the Naqada period to approximately 3800 to 3700 B.C. When looking back over millennia, a couple of centuries might seem like a modest change. But the absolute chronology’s new start date of the Naqada period, 3800 to 3700 B.C., is important because it establishes that the period between nomadic herders transitioning to permanently settled farmers and then into a unified political state was much faster than we thought. Archaeologists working with the traditional relative chronology had placed the foundation of ancient Egypt as late as 2900 B.C. The new absolute chronology puts the unification of the region into a state, under one ruler, at 3100 to 3050 B.C. Transitioning from nomadic herders to an organized political state built on permanent agricultural settlements in a mere six or seven centuries is lightning fast in the world of ancient state formation. By contrast, the period between the establishment of permanent settlements and intensive agriculture in Mesopotamia and the rise of the ancient Sumer civilization as a unified political entity was nearly two millennia. Again, Buckley’s chemical analysis of those toffee-like bits provides a clue as to how prehistoric Egyptian society coalesced so quickly. The analysis proved that the practice of mummification was already established as early as the fifth millennium B.C. and that the core recipe already had been worked out and would remain nearly unchanged throughout the course of the civilization. That implies that the scattered, nomadic herders of the early Badarian period were not so disorganized, or so primitive, as archaeologists had commonly believed. “They were incredibly complex,” says Michael Dee of the University of Oxford, a co-author of the first absolute chronology. He also co-authored a 2014 paper in Antiquity that found people of Neolithic Egypt and northern Sudan already shared well-established, consistent beliefs and practices about decorating the body in life and in death. That shared belief system made sudden cohesion into a formal state possible.

In 2006, researchers used radiocarbon-dated material from 150 archaeological sites in the eastern Sahara to map a change in settlement patterns that coincided with increased desertification of the region. From 7000 to 5300 B.C. (left), human settlements, indicated above by red dots, were established throughout the area. From 5300 to 3500 B.C., as the desert encroached, settlements clustered in the fertile Nile Valley. Jay Smith

“It’s not surprising that they could bind together so quickly,” says Dee. “You could see in the culture they already shared the start of what would become a culture around the king, entombing him in grand pyramids.” Buckley agrees, noting that the ingredients he identified in the mummification materials — including some sourced from as far away as modern-day Turkey — indicated a sophisticated culture with established rituals and symbolic values attached to materials used in preparing the dead for burial.

The Role of Climate in a Rising Culture

But why did nomadic herders, ranging for millennia across much of what is now Egypt and northern Sudan, choose suddenly to settle and begin intensive agriculture in the relatively restricted area of the Nile Valley? Some archaeologists believe that climate change was the catalyst. In 2006, researchers pointed to data from 150 sites across the eastern Sahara that showed the region underwent significant desertification over several centuries, beginning about 5300 B.C. Conditions became so arid that even once-inhabited oases and highland refuges were abandoned by 3500 B.C. — just as previously nomadic populations were settling into Nile Valley farming communities, driven to the fertile floodplain by the encroaching desert. “There was a drying up of the Sahara, and people headed to the Nile Valley, that’s true,” says Dee. “But there’s more nuance. The people settling the Nile Valley already shared long-term cultural identities that tied them more closely together than anything to do with climate change.” The overall pace of desertification quickened about 3800 to 3700 B.C., the date of the onset of the agricultural, Nile Valley-based Naqada period, according to the absolute chronology. In an intriguing way, Buckley’s chemical analysis of funerary textiles also supports the idea that it was climate change that forced the nomadic herders into farming the Nile Valley instead. In his analysis, Buckley identified unusual fatty acids that appeared to have come from marine sponges in the material from earlier Badarian-era specimens. The compounds were in only one of the Naqada samples, however, and even then were found in a much lower amount (2 percent compared with more than 20 percent in the Badarian samples). Buckley believes the marine-based fats in the mummification of Badarian-era bodies represented the connection the nomadic herders had to the sea, scores of miles from the Nile Valley. As desertification funneled them into the valley itself, and into intensive agriculture, they lost that connection. Land animal fats, such as those from sheep, replaced the ingredient once derived from marine sponges — and would, millennia later, provide tangible evidence explaining ancient Egypt’s mysterious origins.