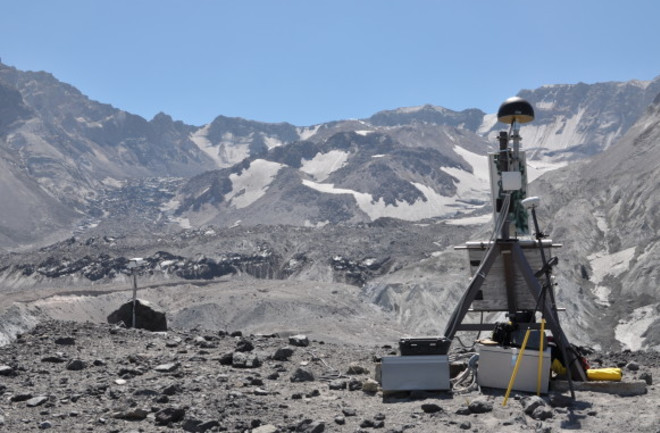 This GPS station on Mount St. Helens is one of the many ways volcanologists can monitor the day-to-day activity at an active volcano (even when its at rest).Adam Mosbrucker / USGS When it comes down to it, volcanoes spend most of their existence not erupting. If you look at almost any volcano, it might have a bout of eruption for days to months at a time, then go quiet for decades, centuries or more. So when you think about the activity at any given volcano, you should not only concern yourself with what might be happening when the volcano is actually coughing stuff up (erupting), but also when, at the surface, things look perfectly calm. There are a number of ways to examine what a volcano was/is doing during these periods of repose. My research is like that of a historian, trying to understand what was going on before eruptions that have already happened. I do this by looking at the evidence of changes in the magmatic system recorded in the crystals that are brought up during an eruption. There you find the record of intrusions of new magma occurring frequently, even during times when the volcanic system might not erupt for 100,000 years! So the real action at many volcanoes might be happening kilometers beneath our feet. Now, if you want to be more like a journalist and look at what might be going in at the moments between eruptions, you can turn to seismology. At many volcanoes, there is a constant background din of small earthquakes caused by magma, hot gasses, hot water, or faults underneath the volcano. They can occur in swarms and across a wide range of depths---from the mantle source of the magma all the way to the surface. You can use the number of earthquakes and their depth to start to weave a story of how magma might be moving underneath a volcano during those quiet periods.

Sometimes keeping a seismic station running during winter is difficult. USGS technicians Kelly Swinford and Amberlee Darold are shown here getting a St. Helens station back online on March 30, 2016.Seth Moran / USGS The USGS and the Pacific Northwest Seismic Network has arrays of seismometers on many of the Cascade volcanoes to watch these earthquakes, so hopefully we'll know well in advance if any of these volcanoes are waking up. It isn't easy to keep the seismic array on these volcanoes running during the winter, as the picture of the seismometer on Mount St. Helens above image shows! So you should be impressed that we have the near real-time seismic data at our fingertips. One such story of a volcano recharging is being written right now at Mount St. Helens in Washington. Since the start of 2016 (see below), an earthquake swarm has been detected underneath the currently-quiet Washington volcano. These earthquakes have been occurring from depths of ~2 to over 7 kilometers beneath the volcano. USGS volcanologists and seismologists are interpreting this swarm as a response to the slow "recharging" for the volcano, where new magma is rising up underneath St. Helens as it slumbers. As the magma intrudes, it imparts pressure on the rock around it and it heats up water/releases gases that can add to that pressure. This generates small earthquakes as the rocks shift in response to that stress.

A compilation of earthquakes under Mount St. Helens from 1988-2016. Magmatic recharge swarms are marked, along with the most recent earthquake swarm. Click on the image to see a larger version.USGS / Cascade Volcano Observatory. Now, this might make some people nervous, but if you look at the compilation of earthquakes from St. Helens over its periods of repose since 1988 (see above), you can see that it has had a lot of recharge events---and most of these don't directly lead to an eruption. In fact, if you look at the biggest recharge swarms prior to the 2004 revival of eruptions, it might have been 5 years between that big recharge event in 1998-99 and the 2004 eruptions. [related] Even in the time since the end of the 2004-08 eruptions, there have been little earthquake swarms: early 2012, early 2014, and now the most vigorous in 2016. These are all normal behavior for a volcano as active as St. Helens. As the USGS report on the earthquake swarm mentions, there are no other signs of potential eruption right now: no changes in gas emissions, no deformation, and no shallow seismicity (<2 kilometers) that are generally associated with an impeding eruption. However, it does mean that even as St. Helens sleeps, the magma that will likely take part in the next eruption is working its way up towards the surface, likely stopping along the way to crystallize and interact with the residue of previous eruptions. It might take a big recharge event to really get the system primed for the next eruption. This question—what might ultimately trigger that next eruption—is one of the big ones in volcanology. However, what we can say is that no volcano is truly "dormant" when it's not erupting. It's just that most of the action is happening far beneath our feet.