Mount St. Helens Has Nothing on Its Little-Known Neighbors 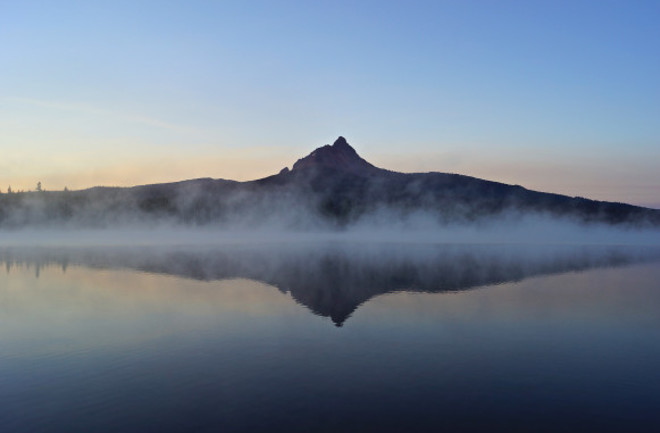 Central Oregon's Cascade Range. Getty Images Most people, when asked what area in the Cascade Range has spit the most lava and ash out over the past 5,000 years, would answer Mount St. Helens. It is the Cascade volcano that has had the most well-known eruption in US history (its 1980 blast) and is the only volcano in the entire range to have erupted in the past 100 years. So, as this leading question might imply, you'd likely be surprised to find out that Mount St. Helens isn't the leader in volcanic eruptions. In fact, neither is Rainier or Lassen or Hood. In fact, the leader in total volume over the past five millennia doesn't even really have a name---but has dumped 15 cubic kilometers (that's over 3.5 cubic miles) of lava onto the surface of the Earth.

The volcano features across Santiam and McKenzie Pass in central Oregon. Landsat 8 image taken July 18, 2015. NASA-USGS / Annotated by E. Klemetti Welcome to Santiam Pass and McKenzie Pass in the central Oregon Cascades. In a stretch of a little over 25 kilometers (~15 miles) across the high Cascades, at least a dozen lava flows have issued from cracks in the Earth or cinder cones over the last ~5,000 years, making parts of Oregon look more like Hawai'i than the Pacific Northwest. Some of the volcanoes that have erupted as part of this cluster include:

That's a lot of eruptions over a relatively small area of the Cascade Range, all occurring in the span from about 4,000 to 1,300 years ago. For most of these eruptions, lava flows were the main product and you can see those flows---blocky a'a flows and cinder cones that formed during the fire fountains that occurred as linear fissure vents opened during these periods of intense volcanism. In the case of Belknap (above) and Sand Mountain, there were enough lava flows to build a small shield volcano (like Kilauea or Mauna Loa, but on a much smaller scale) as multiple vents sent lava flows in all directions. The lava flows from Sand Mountain, in fact, blocked the streams that cross the high Cascades and helped create lakes like Clear Lake (where you can still see trunks of drowned trees in the lake), Lava Lake and Fish Lake. Between Belknap and Sand Mountain, over 170 square kilometers of the Oregon High Cascades are covered in lava. The Blue Lake eruptions created lakes as well, but in a different fashion. Here, hot lava intersected groundwater to cause a large explosion, excavating a pit called a maar. These explosions created some ash and debris deposits that are over two meters thick. Some of the lava did reach the surface as a few small spatter cones are found along the linear chain of vents related to Blue Lake.

Even the rhyolite domes on the south side of South Sister (above) are mostly lava flows making thick domes of sticky lava---including the impressive Newberry Flow (not to be confused with nearby Newberry Caldera that produced its one Big Obsidian Flow around 1,300 year ago) on South Sister that shows gorgeous pressure ridges and flow margins (see below). These rhyolite domes did leave a tell-tale layer of ash across the region, so their eruption would have been impressive, creating tall plumes of ash possibly similar to what happened during the eruption Puyehue-Cordon Caulle or Chaitén in Chile during the past decade. Two outstanding questions: Why was there all this volcanism and is it related? This area around Three Sisters has been a persistent location of eruptions for almost a million years and the area is very complex tectonically, with the intersection of the Cascade Range and the Brothers Fault Zone. Maybe magma created in the mantle can reach the surface easier here thanks to the stresses on the crust. That still doesn't explain why between 4,000 and 1,300 years ago things were so busy---and this is something that will take some time to decipher. One of the most fascinating questions is the potential link between all this hot basaltic magma coming into the crust and the eruptions of some of the few rhyolites in this part of the Cascades (Rock Mesa and Devil's Hills). Did all the heat from that basalt help remelt crystals lurking beneath South Sister, leading to these sticky rhyolite eruptions? Collier Cone on North Sister even has a lava flow that starts with higher silica dacite and ends with basaltic andesite, as if it was forcing out some melted and remobilized crystals before the newer (?) basaltic lava erupted. However, there is a catch when it comes to all this volcanism in the Santiam and McKenzie Pass area: All these volcanoes are likely done (well, beyond South Sisters). These types of eruptions tend to be monogenetic---that is to say that the volcano will erupt for years to maybe a few thousand years, then go quiet for good. This is different than a polygenetic volcano like Shasta that has hundreds of thousands of years of eruptions in the same place that are related. Now, this doesn't mean that a new volcano might not form in Santiam/McKenzie Pass at some point in the future, but likely not from Belknap or Sand Mountain or any of these volcanoes. That being said, if there is any location in the continental United States that any real volcanophile should visit, it's Santiam/McKenzie Pass area in Oregon. It represents the most active area in the Cascades since the end of the last Ice Age and has left spectacular results.