Modern Humans and Neanderthals May Have Cohabitated For 2,900 Years

A study states that the two species lived together in a single region of France and Spain. 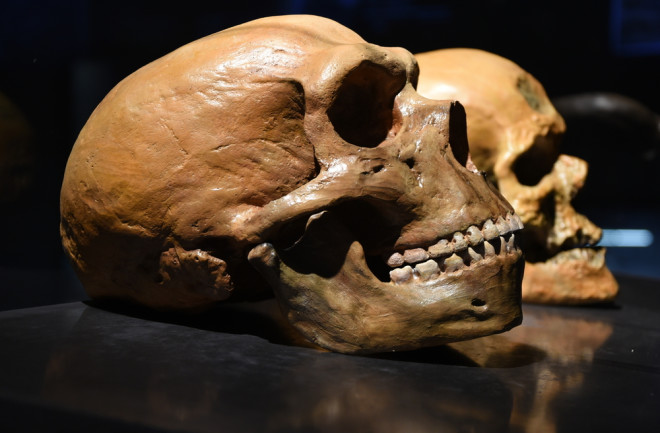 Archaeologists tend to agree that modern humans and Neanderthals inhabited Europe at around the same time. But Europe is a big place, and specialists still struggle to answer questions about when and where these two species interacted with one another.

A new study in Scientific Reports now addresses several of these questions. Analyzing over 60 ancient artifacts crafted by both Homo sapiens and Homo neanderthalensis, the study finds that these species likely lived together in a swath of France and Spain for about 1,400 to 2,900 years. Adding color to the current scientific understandings of the two species, the study could indicate that the hominids of the region traded their ideas and toolmaking strategies.

Our ancient ancestors weren’t the only humans to have entered Europe, and their arrival didn't trigger the immediate disappearance of any of the first hominids from the European landscape. Instead, their entrance initiated a period of continental coexistence between early H. sapiens and H. neanderthalensis — their shorter, stockier and cold-adapted cousins.

Archaeologists have found extensive evidence of this overlap between modern humans and Neanderthals (some evidence even suggesting that the two species cohabited Europe for a period spanning over 5,000 to 6,000 years). But much less is known about when and where these two species actually came into contact. In fact, the traces of these close encounters certainly exist, but determining the species' terrestrial and temporal ranges make the extent of their interactions one of biggest mysteries within the field of archaeology.

Read more: The Mediterranean Plains Where Neanderthals and Modern Humans Came Together

"Little is known about the nature, timing, and specific geographic areas of interaction between Neanderthals and H. sapiens," the authors write in the study. "Evidence for their contemporaneity at any regional scale remains highly elusive."

Now, the analysis of artifacts and tools from H. sapiens and H. neanderthalensis sites in France and Spain reveals a substantial period of regional cohabitation between the two species. The period cannot necessarily prove whether these two species were interacting with one another. But the study authors suggest that the similarities between the analyzed artifacts could potentially indicate the sharing of ideas.

"Taken together, these observations strengthen the proposition that the initial Upper Palaeolithic in this region likely involved a period of co-existence between Neanderthals and H. sapiens," the study authors write in the study. "The precise nature of this co-existence, however, remains to be resolved."

According to this modelling, the study authors say that H. sapiens appeared in the region between 42,653 and 42,269 years ago, whereas H. neanderthalensis disappeared from the region between 40,870 and 39,798 years ago. This would mean that the two species roamed France and Spain simultaneously for a period of around 1,400 to 2,900 years.

With such substantial overlap, it's difficult to imagine that the two species didn't run into one another. Still, only additional research can reveal the true frequency and nature of any such interactions.