I haven't done a Caturday post in awhile, but I found an old photo with a story I wanted to share. In 2009 I filmed a documentary for the show "Engineering the Universe" (this was with the same crew that helped me Kill A Planet). We wanted to make a scale model of the solar system that people could instantly grasp, so we went to the Denver Broncos' Mile High Stadium to use the football field there. We put the Sun on one end and Pluto at the other... but I won't spoil it. It'll air eventually! Anyway, as we walked onto the field through the corridor between bleachers, this cutie was guarding the way: 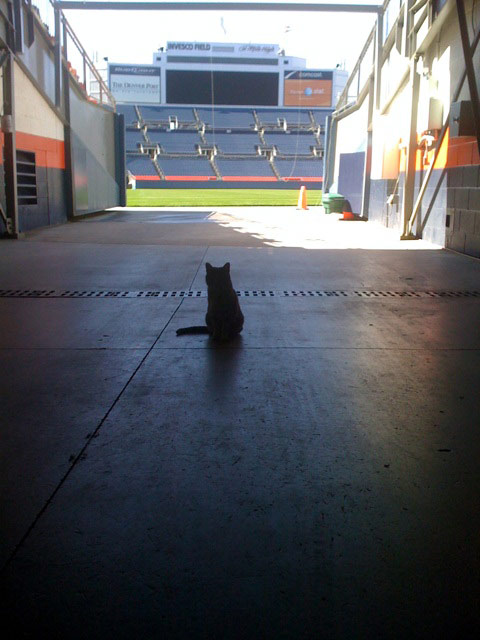 But what was she guarding? If you look down on the right near the end of the corridor, you'll see a blue metal door ajar with a green bin in front of it. I saw some movement, so I peered in... and got a surprise. 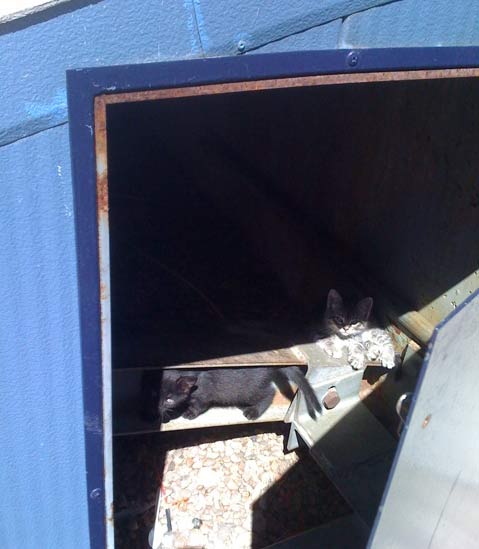 I guess Guard Cat was actually Mama Guard Cat! She was very skittish, but the kittens were friendly and adorable. The whole crew wanted to take them home, but we decided they had a pretty good life right here. I'm sure they get fed, and had plenty of rodents and such to choose from. The stadium is huge and no doubt is the cat equivalent of a food court. Happy Caturday!

The SciencesThe Cheater's Guide to Interstellar Travel: A Conversation with Slava Turyshev