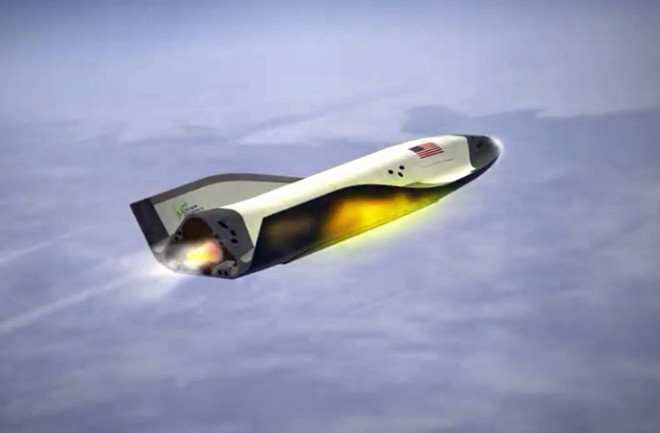 The same electromagnetic radiation used to heat up a Hot Pocket could propel a shuttle into space.

A Colorado-based technology company, Escape Dynamics, says initial testing indicates it’s possible to launch single-stage shuttles into orbit using microwaves beamed from the ground. If researchers can make the concept work, it could drastically reduce costs and make it safer to send satellites and humans into space.

Currently, we rely on multistage rockets packed with an extraordinary amount of combustible fuel to propel shuttles into space. The fuel is heavy, making up about 90 percent of the rocket’s initial mass, which makes it expensive to ferry cargo and people into space — it costs anywhere from $5,000 to $50,000 per kilogram of payload delivered into orbit. Furthermore, there’s always a risk when you strap a human into a rocket that relies on powerful chemical combustion.

Escape Dynamics wants spacecraft to shed the weight and safety risks associated with explosive rocket fuel and use hydrogen for propellant. The space-plane would carry a far lighter fuel tank filled with hydrogen, which would be heated up by microwaves sent from Earth to the space-plane’s external microwave-absorbing heat exchanger. The hydrogen would heat up in the tank and eventually burst out of a nozzle system in the shuttle to create thrust.

When Escape Dynamics tested a scaled-down, ground-based thruster using helium as fuel, it generated a specific impulse — the force that moves a rocket through the air — of 500 seconds. Engineers believe they can push that number to 600 with hydrogen, a duration they believe would be enough to send their space-plane into space. For comparison, chemical combustion rockets top out at about 460 seconds.

If Escape Dynamics can perfect the technique, they believe their space-planes could fly into orbit, deliver a payload of about 200 to 400 pounds, glide back down to Earth and be reused multiple times — a goal Elon Musk’s SpaceX is currently pursuing.

There are still quite a few challenges standing in the way before Escape Dynamics’ microwave-powered space-plane can run missions to the International Space Station. Engineers need to make sure it’s possible to build a microwave antenna array powerful enough to push the craft into space. They also need to ensure the microwaves stay on target and, of course, that it’s safe to fire microwaves into space.

But if they can put all the pieces together, the system could radically transform the way we send people and cargo into space.