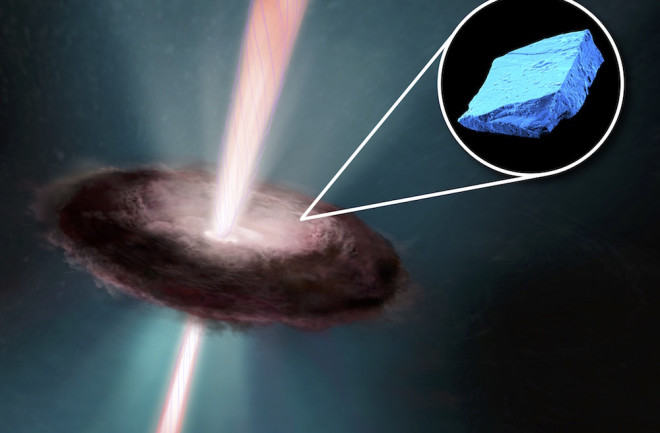 Artist's illustration of the dusty disk of the early Solar System with an inset microscope image of a hibonite crystal. (Credit: Field Museum, University of Chicago, NASA, ESA, and E. Feild (STSCL))Tiny crystals in meteorites were witness to the sun’s unruly behavior in its earliest years.The sun sends a lot more than sunshine and rainbows our way. High-energy particles capable of messing with the nuclei of atoms stream off our star constantly. Earth’s magnetic fields shield us from many of the harmful effects of this energetic particles shower but not every solar system object is as protected.

The sun was even more active, researchers found, in the earliest years of the solar system, before Earth existed. Scientists investigated tiny crystals from the Murchison meteorite that fell to Earth in 1969 — crystals called hibonites. These crystals were probably some of the earliest minerals to form in the solar system, emerging even before Earth did some 4.5 billion years ago. Scientists found that the hibonite crystals had lots of helium and neon atoms, a result of being bombarded by tons of energetic particles from an infant sun. The results were described Monday in

Astronomers have observed that young stars are generally very active and emit a lot of high-energy particles compared to stars farther along in their lives. To confirm whether the sun went through an active phase like this, scientists have been studying the chemical composition of meteorites to look for tell-tale signs of reactions caused by energetic particles. In the past, they’d found evidence suggesting the sun had an active early phase thanks to other known elements in the meteorites, but these helium and neon measurements in hibonite crystals are the most conclusive evidence yet. “What came together here was that we looked at samples that are probably the oldest or among the oldest materials that we have access to from a meteorite, because it was important to look at very old materials, and then we looked at helium and neon,” says geoscientist Levke Kööp, the first author of this study. Helium and neon atoms found in the crystals were the giveaway. Since helium and neon are in the family of elements called noble gases, they almost never form chemical bonds and wouldn’t have bonded to the hibonite crystals as they were forming. So how did these noble gas elements get there? Hibonite crystals are made up of several elements, including calcium and aluminum. When high-energy particles like those from the Sun hit some of these atoms, they can split into smaller atoms — like helium and neon. Kööp and her collaborators conclude that since these noble gases couldn’t have bonded into the crystals as they formed, the helium and neon atoms they found in hibonite crystals must be the products of this splitting caused by high-energy particles.The researchers found that other grains from the meteorite did not show the particle radiation’s effects to the same degree. This implies that a lot of the energetic particle bombardment that affected the hibonite crystals must have happened very early on in the history of the solar system, when the crystals were still young and hadn’t been incorporated into larger rocky bodies that would eventually fall to Earth as meteorites.

A microscope image of a tiny hibonite crystal, only about as wide across as a few human hairs. Scientists say these hibonite crystals found in meteorites were some of the earliest minerals to form in our solar system and are older than the Earth. (Credit: Andy Davis, University of Chicago)

Comparing the old hibonite crystals to crystals that formed later in the solar system’s history revealed that the sun was very active early in its life, but something changed dramatically in the early solar system so that later crystals did not experience as much energetic particle radiation. “Something changed in the irradiation condition,” Kööp says. “For some reason the hibonites were irradiated, but the later formed materials were not. And we don’t know exactly why that is.”Kööp says it could have been some change in the properties of the dusty disk of the early Solar System, which would have shielded minerals from the some of the sun’s radiation, or it could have been a change in how much energetic particle radiation the Sun was emitting very early on. Next steps, Kööp says, would be to look for the same helium and neon effects in other early Solar System minerals. She also thinks this work will be useful for simulations modeling the evolution of the early Solar System and its dusty disk properties. In any case, Kööp is happy that the helium and neon atoms managed to stick around inside these tiny crystals for so long. “It actually worked out so nicely, that the signature was so clear,” she says. “There are many, many reasons why we might have not seen it. So actually it seemed like all the stars aligned.”