I know I've been writing about the Sun quite a bit lately, but I have a followup to yesterday's cool video of the big solar flare... and you're gonna like it. I was fooling around with helioviewer.org, watching the flare in different wavelengths of light detected by NASA's Solar Dynamics observatory, when I switched to 17.1 nanometers -- in the far ultraviolet. At that wavelength, the glowing plasma that flows along the Sun's magnetic field lines is very bright. The images were so beautiful, so incredible, I made a video animation of them, covering the time range of January 26, 2012 at midnight to January 28 at noon (UTC), which includes the huge X2 solar flare that erupted on the 27th. The video shows huge loops of magnetism on the Sun's surface, glowing plasma flowing along them... and then 48 seconds in the flare changes everything. Watch:

Holy wow! Isn't that awesome? Make sure you watch in in HD, and make it full screen to get the whole effect. What you're seeing is Active Region 1402, a sunspot cluster. This is a tangled collection of magnetic field lines piercing the surface of the Sun. Like a bar magnet, there are two poles to each loop, a north and a south pole. The gas on the surface of the Sun is so hot it has electrons stripped off, so it's strongly affected by the intense magnetic field, and flows along these towering loops, which can reach heights of 300,000 km (180,000 miles) in this region. 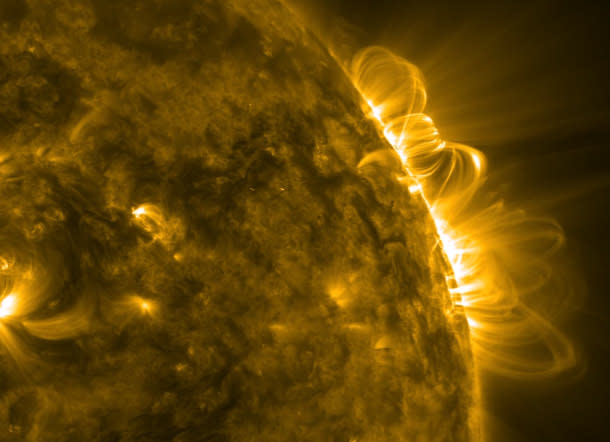 The loops are tied to the plasma, too, and this material is twisting and roiling as it rises and sinks. The lines get tangled, and like a short circuit they can snap and reconnect. When they do, they release vast amounts of energy as a solar flare. In the video you can see the messy, disorganized loops getting more and more tangled up. Then KABLAM! The flare itself is not visible because it happened too quickly to be seen on this timescale (see the video yesterday for that). But you can see the effect on the magnetic field loops! They suddenly become far more organized, tight, and calm. The Sun is fiendishly complex, and astonishingly beautiful. Clearly, to our brains, these things are connected. Remember, too: this beauty, this magnificence, is brought to you by science. Without our curiosity and our need to understand the Universe better, you would never have been able to watch in awe as superheated plasma arcs dwarfing the Earth itself grew and collapsed on the surface of a star one hundred fifty million kilometers away. Think of that the next time someone says science takes away the beauty and mystery of life. Credit: NASA/SDO/Helioviewer.org