Mentos Is to Diet Coke as Coffee Filter Is to Guinness?! 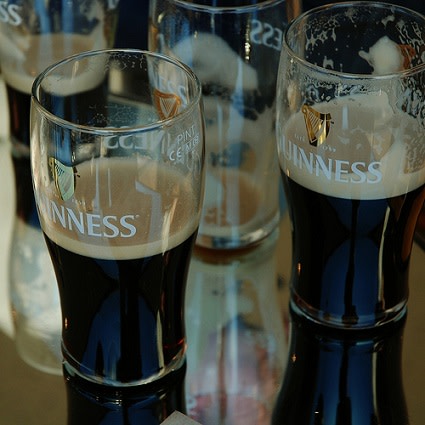 The SATs might have made you hate analogy problems, but this one sure is tasty. That clangy thing taking up space in the bottom of your Guinness or Tetley's can might soon be done away with and replaced by a coffee filter. The ball inside the Guinness can, called a widget, contains a pocket of nitrogen gas held under pressure. When some lucky person opens the can, the pressure is released and the gas shoots out into the beer through a small hole and creates the foam. You may now be thinking, Wait a minute---most beers seem to have plenty of gas bubbles even without some fancy widget. The thing is that Guinness and similar brews need the widget because nitrogen bubbles are smaller than those filled with carbon dioxide, the bubbling gas in other fizzy drinks. The small nitrogen bubbles make Guinness' foam deliciously thick and creamy, but it's harder to get the gas to come out of solution. The widget forces lots of excess nitrogen into the beer, setting off a well-timed bubble eruption. But the widget is not the only way to send nitrogen bubbles cascading upward. In normal beers, carbon dioxide readily forms into bubbles on tiny plant fibers floating around in the tasty, tasty beer, remnants from its agricultural upbringing. This is the same reaction, called nucleation, that produces the Diet Coke and Mentos fountain effect that rocketed to YouTube popularity a few years ago. This combination is reactive because Mentos have a craggy, nook-and-cranny-like surface that provides abundant nucleation points for carbon dioxide. New research by a team in Ireland (no way!) has discovered a method to harness this same effect to pull even stubborn nitrogen out of solution: just include more of the fibers. The right number of bubbles could be made by a postage-stamp sized piece of coffee filter paper on the inside of the can, The Physics Arxiv blog says:

"A single ﬁbre produces one bubble every 1.28 seconds," they say. That doesn't sound like enough to make any difference to a can of stout, which requires some 10^8 bubbles to form a head. But if a drink takes 30 seconds to pour, Lee and co calculate that this would require 4.3x10^6 fibres, about as many as you get in a sheet of coffee filter paper about 3cm square.

and his research team take this bubble calculation seriously, he explained to Wired.com

“What happens around these fibers is really complex, so it’s a ripe area for research,” said Lee, who posted his team’s research March 2 on arXiv.org. “This is also a matter of national pride. Stout beers are as culturally important to Ireland as champagne is to France.”

Discoblog: My, This Beer Has Some Delicious Proteins

Discoblog: Space Tourists Will Get Their Own Special Space Beer