Menagerie of Animals Launched Into Space 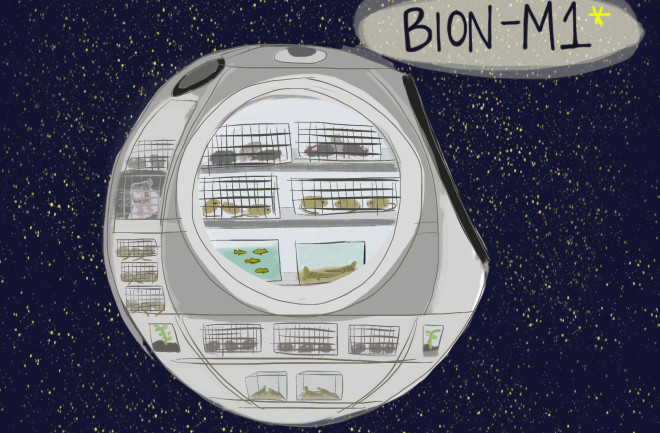 Last Friday, a crew of geckoes, forty-five mice, eight Mongolian gerbils, fish, snails, and plant seedlings were rocket launched on the Bion M1 into space, for the longest animal space experiment to date, a round trip lasting thirty days. The Russian spacecraft will relay information to scientists on the ground interested in studying the health effects of space on the animals.

Animals were the pioneers for manned space flight. Scientists wanted to make sure animals could survive before they sent any humans. Russia sent dogs, rabbits, and mice on short duration flights in the early 1960s.

The last Bion expedition was in 1997, when a fifteen day expedition took Rhesus monkeys, geckos, and amphibians into space. In its half-century of existence the Bion program has sent everything from seedlings, unicellular organisms, and plants to Rhesus monkeys, insects, rats, and fish into space.

Describing the animals that are picked to take part, Pavel Soldatov of the Institute of Biomedical Problems in Russia says, “They go through selection stages no less stringent than the astronauts.” One can’t help but wonder how an animal indicates its interest in being considered—do Mongolian gerbils dream of becoming astronauts someday? The animals selected must be social animals, Soldatov says, used to living with others. Three animals (of the same species) are assigned to each cage, where they are fed a paste-like, vitamin enriched cereal and water diet six times a day over the course of the journey.

The venture isn’t solely a Russian one.NASA is partnering with Roscosmos, Russia’s Federal Space Agency, and an international team of scientists to understand the effects of spaceflight down to the cellular and molecular level. NASA has appointed nine US scientists to work on collaborative research projects with Russian scientists relating to this mission, taking a whole-organism look at the animals.

The researchers are interested in how microgravity and radiation affect sperm motility in mice, a continuation of the omnipresent scientific obsession about whether humans will be able to procreate on decades-long expeditions in space.

Other experiments focus on how microgravity affects arteries, whether the spinal column changes, whether salivary glands and tendons are impacted, and whether the reduced biomechanical forces in microgravity lead to cartilage breakdown in major joints. Scientists will study the gravity-detecting mechanisms of the inner ear, and look for the potential developmentof motor disorders in space based on mice behavior.

Mounted on the exterior of the spacecraft are containers that will open in orbit to explore whether peptides and nucleotides get synthesized in open space, and the effects of the vacuum of space on plant seeds.

Upon return, the animals will be studied for their adjustment back to gravity, but will then receive the sad fate of euthanization so the scientists can more closely study the physical impacts of their journey.

Albert, First Monkey in Space image based on a photograph by NASA.