Meet the Exoplanet Class of 2014

Every year, we're finding new and exciting exoplanets. Here's a look at this year's standouts. 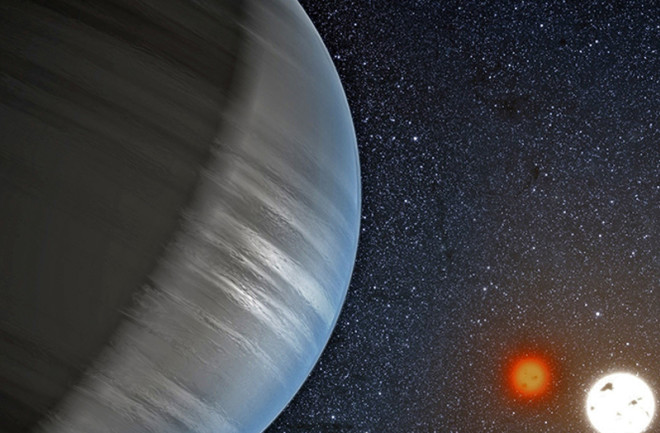 Another year, another amazing haul of exoplanets — worlds around other stars. The known total doubled to over 1,800, and headlines trumpeted several exciting, groundbreaking firsts. The numerous alien-world oddities that cropped up expanded our limited, solar system-centric perspective on nature’s creativity. Just have a look at some of the “stars” of the Exoplanet High Class of ’14!

This mouthful of an exoplanet stands as the first approximately Earth-size world, with an Earth-like orbit, in a double-star system. Before, astronomers had no clue if Earthly worlds could form in such systems. Given that at least half of all stars are binaries, the finding greatly expands the odds for life in the universe.

Talk about outside the mainstream. GU Psc b set the record this year for the greatest distance from its star. This rebel planet hangs out in an orbit about 200 billion miles from its host star — about 2,000 times the average Earth-sun distance. As big as about a dozen Jupiters, GU Psc b’s outsider status challenges leading planet formation theories.

This burly world is the first-ever “mega-Earth.” Scientists knew that Kepler-10c was a “super-Earth” — a planet a few times Earth’s size — since discovering it in 2011. But these planets could range from gaseous mini-Neptunes to rocky Earth-like worlds. A new measurement of Kepler-10c’s mass, however, confirmed the world is solid, having 17 times Earth’s mass. It’s the “Godzilla of Earths,” one researcher quipped.

Most Likely to Succeed

Hopes that alien life might exist got a huge boost in 2014 with the discovery of Kepler-186f. It’s the first Earth-size planet discovered in another star’s not-too-hot, not-too-cold “Goldilocks” zone, where liquid water can persist on a planetary surface. Potentially the friendliest-to-life exoplanet yet found, Kepler-186f will be studied for years to come.

There’s always a moody one. Kepler-413b has a very wobbly orbit, research this year showed. As it orbits a pair of stars, the exoplanet dips above and below the plane of the stars’ orbit in an 11-year cycle. Earth takes 112,000 years to complete such a wobble cycle. Unlike most “transiting” exoplanets — which, from our perspective, cross the faces of their stars like clockwork — Kepler-413b goes long periods without a transit because of its wild orbital swings. It won’t transit again until 2020.

A loyal buddy, that Kapteyn b. This newfound exoplanet is 11.5 billion years old, more than twice our planet’s age. But here’s the kicker: Kapteyn b might well have been — or even may still be — habitable, as it, too, has an orbit that could allow liquid water. Life would have had many extra billions of years to develop here under the stalwart planet’s dim, red sun.

Exoplanet High had a few big dropouts this year. Gliese 581 d and Gliese 581 g, touted as the first potentially habitable exoplanet back in 2010, both failed to make the grade. Closer scrutiny of the Gliese 581 system reveals that the dips in starlight thought to arise from these planets crossing in front are more likely just due to sunspots.