Meet the Comb Jelly, the Sister Species of All Animals 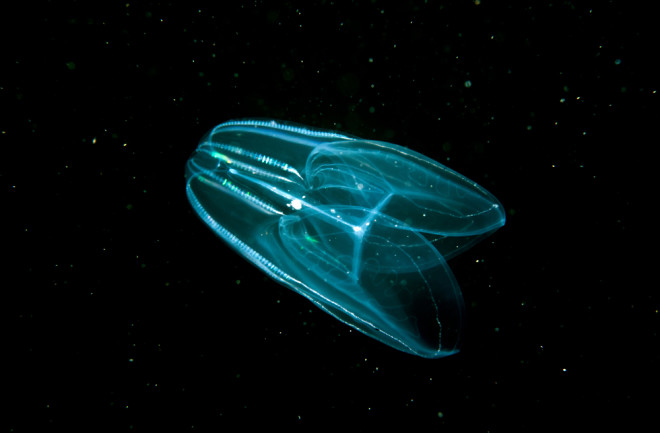 A comb jelly. (Credit: Kondratuk Aleksei/Shutterstock) In the debate over what the first animal was, it comes down to sponge vs. jelly. And in recent years, researchers worked to settle the score in scientific journals, publishing competing genetic analyses that purport to show either one or the other was the first to diverge from our last common ancestor. This would make it a sister lineage to all other animals, and enshrine it as our most distant relative in the Animal Kingdom. The most recent salvo, published Monday in Nature Ecology & Evolution, comes from researchers at Auburn University and it's decidedly pro-jelly. They used what they say is the most comprehensive collection of comb jelly genetic material to establish a new molecular clock for the species, which they say puts their divergence back before sponges and delineates clear divisions within their taxonomic group. Comb jellies, which we should emphasize are entirely separate from jellyfish, certainly look the part of a distant ancestor. They're the largest animals to use tiny whip-like structures called cilia to swim, in addition to possessing tentacles—which in turn have their own little tentacles covered with sticky cells used for catching prey. They've got egg-shaped, translucent bodies and are normally less than an inch or two long, although some species can grow quite large. Comb jellies are found throughout the world's oceans, and have even become problematic as an invasive species in some areas where they're stealing food from fish and other creatures. The debate over their place in the taxonomic tree is based on competing analyses of genetic information from both comb jellies and sponges. The most distant relative title has passed back and forth a few times as different data sets and statistical methods have been used to try and settle the issue. In the past, dubious data sets have been blamed by both sides for muddying the waters, something the Auburn team claim to have overcome. They sequenced samples from 27 species of comb jelly, in addition to previously analyzed data from comb jellies and other species, and accounted for misleading factors that arise in groups that have been evolving for a long time. The number of genes indicating the comb jellies were older outnumbered those in favor of sponges every time, they say. They appear to be have been the first to diverge from the lineage that leads to every other animal as well, meaning that they've been separated from us for longer than any other group. Comb jellies split off at least 500 million years ago, the researchers says, though that number could well be even larger, and have been going their own way ever since. The find gives us better insights into the long evolutionary road that led from single-celled organisms to us, and gives us a better idea of how and when various lineages split off to form their own groups. The research also helps give a better idea of how comb jellies themselves should be organized, although the authors do note that their group is in need of significant revisions. One important finding from the paper though is that most of the species today can be traced back 350 million years or so — much longer than the 65 million years previously suggested. A population bottleneck — or a period that saw most species die off — appears to have occurred around then, setting comb jellies on their current trajectory. This most recent work isn't definitive, of course, and team sponge will likely weigh in again in the future. It does, however, amount to a better understanding of comb jellies and their genetics, research that is helping to home in on an answer. Which is exactly how science works.