From alien angels to hyperbolic lamp shades, these works of art were created not with paintbrush or chisel, but with equations and geometry. 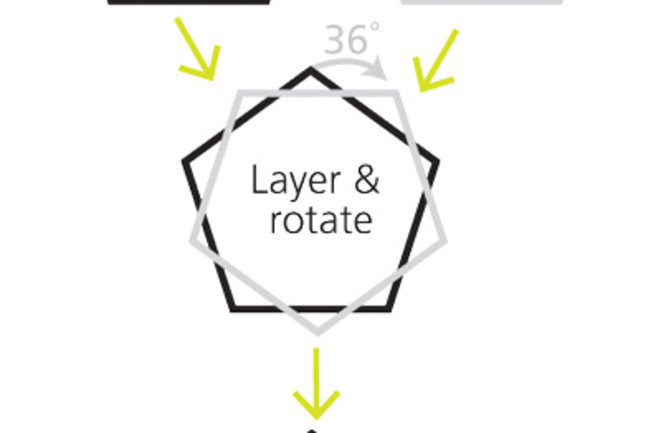 Though math and art may seem like complete opposites, for some artists, mathematics actually provides a rich vein of ideas for an artist to tap. And, conversely, exploring those ideas artistically can offer new insights into the mathematics involved. This fusion can result in deeply beautiful and meaningful objects like the ones you’ll see here, our favorites from competitive displays at recent Joint Mathematics Meetings, which bring together thousands of mathematically inclined individuals.

Gabriele Meyer’sHyperbolic Lamp Shade is the physical manifestation of the solution to a 2,000-year-old mathematical conundrum.

From extraordinarily simple, apparently unassailable assumptions called axioms (such as “Things that are equal to the same thing are also equal to one another”), Greek mathematician Euclid deduced surprising truths that seemed to apply unfailingly to the real world. But for centuries, one of the axioms he built his geometry on — one far more complex than the others — bugged mathematicians. To understand it, imagine a straight line and any point not on that line. Is it possible to draw a line through the point that is parallel to the given one? The axiom says yes, but only one such line could exist.

But mathematicians always wondered: Couldn’t you prove that, rather than assuming it? In 1826, Russian mathematician Nikolai Lobachevsky shocked the world with a simple answer: No. He created a new form of geometry that was the same as Euclid’s except for that one axiom. In Lobachevsky’s geometry, there can exist many lines through a particular point that are parallel to another line.

Lobachevsky’s work seemed to be a mathematical curiosity of immense theoretical importance — but entirely inapplicable to the real world. In the early 1900s, however, physicist Herman Minkowski realized that non-Euclidean geometries like Lobachevsky’s may be superior at describing our physical world, despite being extraordinarily difficult to visualize.

Enter crocheters like Meyer, a mathematician at the University of Wisconsin-Madison. Crochet, as seen in Meyer’s lamp shade, is the perfect tool to help people visualize Lobachevskian geometry. Imagine crocheting what would ordinarily be a flat square except that in each new row, the number of stitches increases by, say, 10 percent. Then the number of stitches will grow exponentially. If the first row had 10 stitches, then after only 25 rows, each row would have more than 100 stitches — and after 50 rows, you would have more than 1,000! With all those extra stitches, the fabric can’t lie flat, so it bulges and waves.

Meyer started by crocheting an ordinary spiral. Then on the edge, she added more stitches than fit in a flat space, creating frilly, billowing edges that catch light or let it through.

“The number of stitches grows so fast that eventually, you have to stop,” she says. “It just won’t all fit in Euclidean space.” So maybe this model of Lobachevskian space isn’t perfect — but it is beautiful.

Most artists apply their colors using paintbrushes, pens or pencils, but Etienne Saint-Amant uses mathematical formulas. How do these abstract mathematical relationships produce works of art? Because of two properties of the functions: They can be defined and expressed on the two-dimensional plane, which naturally corresponds to the canvas; and Saint-Amant can associate colors with the numbers the functions ordinarily produce. This way, each function translates into an image. By tweaking the functions and overlapping their output, Saint-Amant creates depth and emotive abstraction in his artworks.

To create the sky and clouds in this image,The Key, Saint-Amant used a function that describes the way that dust particles randomly bounce and jiggle in the air, a phenomenon called Brownian motion. A different well-known function produces the reflecting lake, and another (created by Saint-Amant himself) produces the foreground.

Instead of watching TV, high school math teacher Daniel Gries relaxes by playing around on computers, programming them to make art. This piece began with his attempts to get a computer to draw a circle imperfectly, as though drawn by a wobbly human hand. A technique derived from fractals provided him with just the tool he needed, creating a similar kind of wobble at different scales, as if combining a slight quiver in the fingers with a larger tremble in the wrist. This allowed him to produce a bunch of cute little dots — the edge of the faux-hand-drawn circle. Next, he started dragging his circles across the page while allowing them to deform according to his fractal method. He traced each point on the circle in a different color to create this organic, scarflike image.

The roots of Francesco De Comité’s Serendipist Alien Angel go back 2,300 years to Greek geometer Apollonius of Perga, whose mathematical work inspired the idea of an Apollonian gasket.

To make an Apollonian gasket, start with three circles that just touch each other (mathematicians call them “tangent”) and that just fit inside a bigger circle. Then, wherever three circles come together, squeeze in a fourth one that just touches the other three. Do that again, and again and never stop — you’ll end up with a sort of mathematical doily. This is the Apollonian gasket. It has the remarkable property that it looks just the same if you zoom in on one piece of it as if you look at the whole thing, which, in mathematical terms, makes it a fractal.

But that raises a thorny mathematical question: How do you determine a fourth circle that squeezes perfectly inside three tangent circles? Apollonius claimed he knew how — but the book in which he provided the proof was lost to time. Renaissance scholars heard the statement of Apollonius’ theorem of how to construct the fourth circle and challenged one another to re-create his missing proof. Descartes discovered how to compute the radius of the new circle in 1643, but he couldn’t figure out how to place it in exactly the right place. It wasn’t until the 1990s that Allan Wilks and Colin Mallows of AT&T Labs finally found that final piece of the puzzle, and they had to use computers to do it.

Continue this process forever, and you will have an Apollonian gasket.  | Alison Mackey/Discover

De Comité was working on a computer program to efficiently create an Apollonian gasket; he began to experiment with variations and was struck by the beauty of some of the results. This image is the result of one of his experiments.

Mojgan Lisar is an artist who specializes in tahzib, the Persian style traditionally used to illuminate the margins and title pages of medieval holy books. Reza Sarhangi is a mathematician at Towson University in Maryland who specializes in mathematical art, especially Persian tilings. Blue Sun combines both forms of Persian art.

The central construct of the piece is the decagram, a type of 10-pointed star, which Persian artists have incorporated into their art for centuries because of its geometric properties. To create a decagram, take a pentagon and set a second pentagon on top of it with a 36-degree twist. The star-shaped outer edges of the pentagons form a decagram.

Blue Sun has a structure of four concentric decagrams. Sarhangi created a Persian tiling pattern for the innermost and outermost regions between the decagrams, using only shapes that could be created with a straightedge and compass. Lisar created a tahzib pattern for the two middle regions, with traditional stem, leaf and flower images. Both artists incorporated 10-fold rotational symmetry — if you imagine a clock hand starting at the top and sweeping one-tenth of the way around, the 36-degree slice it sweeps out will be identical to each of the nine remaining slices. Each sector also has its own reflective symmetry: Draw a line starting at the center of the figure dividing the slice in half, and fold along it. The sides that fold on top of each other will be identical.

Persian tile artists were mathematicians, even if they didn’t prove any theorems, Sarhangi says. “The main concern of a designer or craftsman was to present a visual harmony and balance,” he says, “not only in deep details, but also as a whole. Nevertheless, the steps taken for creating such designs include techniques that are only acquired and understood by mathematicians. An individual with the knowledge of such detailed techniques is a mathematician, artist or not.”

The miracle of George Hart’s sculpture SuperFrabjous is that it doesn’t fall apart.

Two smaller structures make up the sculpture: The first contains six flat pentagons that interweave with each other, each floating in isolation, unsupported by any of the others. The second contains five interlocking tetrahedra (pyramids with a triangular base), also floating in isolation from one another. Separately, each structure would collapse, but the two support one another, stabilizing their airy flotation.

Each of the two smaller structures has 30 sides: six pentagons with five sides each, and five tetrahedra with six edges each. Each pentagon side connects with a single tetrahedron edge — this is what gives the sculpture its solidity. Hart chose sharply waved edges for the pentagons and allowed the edges of his tetrahedra to stray from straight lines, undulating first up and then down in a wave. The sculpture is thus created from 30 laser-cut wood pieces, each containing one pentagon edge and one tetrahedron edge.

Hart built his sculpture on the underlying geometry of the rhombic triacontahedron, which is most familiar — if it’s familiar at all — as the 30-sided die in Dungeons & Dragons. (“Triacontahedron” is a mouthful, but it just means “30-sided solid figure with straight edges and flat faces.” “Rhombic” means that its faces are all rhombuses — parallelograms with sides of equal lengths.)

“I think of myself as an applied mathematician, applying math to sculpture,” Hart says. “Working three-dimensionally gives you a tactile understanding, a different way of knowing what’s happening. Like in any other branch of mathematics, you notice things that seem to work out, and you make conjectures, and that leads you to prove them or disprove them. It leads to mathematical questions.”

[This article originally appeared in print as "Visions of Math"]