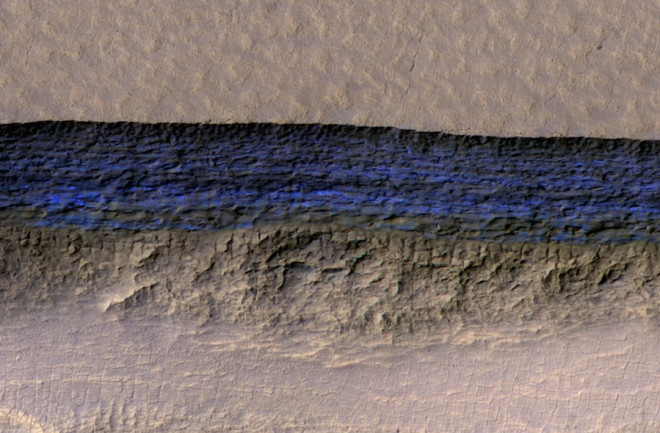 In this color-enhanced image of an eroding cliff (or scarp) on Mars taken from above, water ice is shown in blue. The top third of the image is the planet’s surface leading up to the cliff’s edge, while the bottom third is the valley below. (Credit: NASA/JPL/University of Arizona/USGS) Despite the fact that Mars has an atmosphere just 1 percent as dense as Earth’s, the surface of the Red Planet still has to deal with plenty of weathering and erosion. In 2008, researchers even captured a full-scale avalanche on Mars as it plunged down a 2,300-foot slope into a valley. These types of geological events often expose the structures beneath the martian surface, revealing layers of rock, dry ice and even water ice. In a study published Thursday in the journal Science, researchers using the Mars Reconnaissance Orbiter (MRO) investigated eight steep and eroded slopes (known as scarps) at various locations across Mars. At each of these locations, they found thick shelves of relatively pure water ice located as little as 3.3 feet below the planet’s surface. Furthermore, some of these massive ice deposits were found to be more than 330 feet thick. While scientists have observed water ice on the surface of the Red Planet many times before, researchers rarely get a chance to learn this much about its layering, thickness, purity and prevalence. According to the research paper, “The ice exposed by the scarps likely originated as snow that transformed into massive ice sheets, now preserved beneath less than 1 to 2 [meters] of dry and ice-cemented dust or regolith near ±55° latitude.” In 2008, the Phoenix Mars lander discovered similar ice deposits along martian scarps, but they were found in regions much closer to the planet’s northern pole. Since the ice deposits discovered in today’s study were found intact along the scarps’ steep, eroded slopes, the researchers believe the ice is “cohesive and strong.” Furthermore, the team found that the ice appears banded, showing layered variations in its blue color. This suggests that the massive ice deposits are composed of many distinct layers that have been squished together over time, preserving a record of Mars’ climate history. However, because there are few craters near these sites, the authors suggest the ice was formed relatively recently—in the past million years or so.

Although the massive ice deposits formed quickly (geologically speaking), the researchers say they also recede a tiny bit each summer. In one scarp, the team found that over the course of only three martian years, multiple meter-wide boulders dislodged themselves from the ice deposits, tumbling down into the valley below. Based on this, the researchers estimated the ice is retreating (horizontally) at a rate of a few millimeters each year. This is probably due to the exposed, solid ice sublimating into gas as it contacts the thin martian air. The discovery of these large reservoirs of pure water ice adds yet another piece of evidence supporting the increasingly held theory that water ice not only exists on Mars, but also is surprisingly common. Although the ice could obviously be used as a source of water for future manned missions to Mars, scientists have a long way to go before then. However, with the Mars 2020 rover just a few years away, the discovery of eight more tantalizing sites ripe for investigation is still an exciting find.