Mars Doesn't Need Our Microbes: How to Keep the Red Planet Pristine

It may be time to change the strict rules in place to keep Earthly microbes from contaminating Mars. 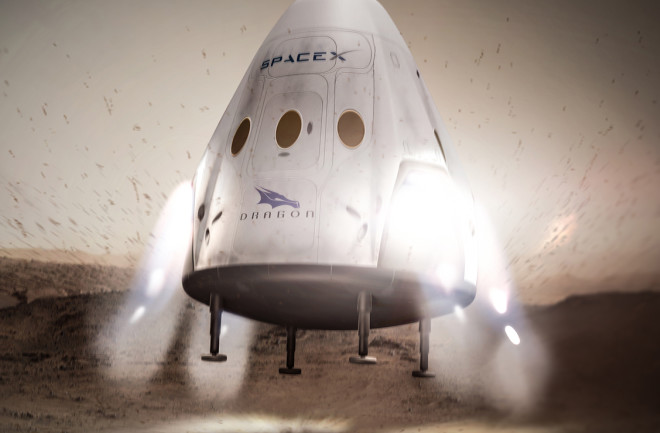 SpaceX hopes to send crewed ships to Mars in the next decade. (Credit: SpaceX)

Humans have walked on only two worlds in the solar system — Earth and its moon. But it’s looking more certain that Mars may be the next member of this exclusive club. Along with NASA, private companies like SpaceX and Mars One are itching to put boots on the Red Planet. Human exploration could certainly improve the science performed on Mars, but our arrival could also have important implications in the hunt for life.

Whether or not life ever managed to evolve on Earth’s red neighbor remains an open question. Conditions on Mars don’t support large creatures, but microscopic life-forms may have once thrived in the planet’s oceans. They may even survive today in the sparse pockets of water on and below the Martian surface. If so, it’s possible they could be similar to Earth’s life-forms: Life may have managed to jump from one world to the other by riding on rocks flung off their surfaces by asteroids.

The alternative would be no less significant. If Mars is barren, and researchers find that life evolved only on a single planet in the solar system, it reveals how difficult it is for living organisms to arise in the first place, with implications for the rest of the universe.

But there’s an automatic difficulty in clearing up the mystery of “life on Mars,” an inherent catch-22: Any astronauts touching down to investigate life could contaminate the area with their own microbes, making it impossible to know the truth. NASA has long had protocols in place to limit such contaminations, but with the increased pace of private efforts, and the growing likelihood that actual humans may reach Mars, those standards might have to change.

Future astronauts landing on Mars, as in this Lockheed Martin illustration, face a conundrum: How do you study alien life without doing harm? (Credit: Lockheed Martin)

Steve Clifford, a senior research scientist at the nonprofit Planetary Science Institute, thinks any human landings made without serious precautions are bad news. “If the commercial firms are allowed to pursue their agendas, Mars will be irreversibly contaminated when the first human sets foot on Mars,” he says. Right now, we’re stuck between our ambitions and our curiosity.

Interplanetary contamination is a very real concern. When the Apollo astronauts returned home after their lunar jaunts five decades ago, they were quarantined; scientists worried they might bring back potentially lethal material that could spread on Earth. While that fear was quickly put to rest, future samples of Martian materials could carry dangerous microscopic organisms. Stringent quarantine procedures are in place to minimize that concern.

More worrisome, and equally realistic, is the reverse possibility, that something from Earth could contaminate Mars. Imagine the confusion if instruments on the Red Planet do detect an organism, but can’t confirm whether it originated on Mars or stowed away on a poorly cleaned spacesuit. As Tanya Harrison, a Martian geologist at Arizona State University, puts it: “What if we mess up the biggest discovery in human history?”

Clifford points out a far worse scenario. What if native life exists on the Red Planet, but an Earth microbe wipes it out? “In our search for life, we might be responsible for the extinction of the very first alien biosphere that we detect,” he says.

NASA sterilizes a Viking lander in the 1970s. (Credit: NASA)

It’s a big enough deal that in 1967, the United Nations ratified the Treaty on Principles Governing the Activities of States in the Exploration and Use of Outer Space, Including the Moon and Other Celestial Bodies. Fully on board with the sentiment, NASA’s Office of Planetary Protection makes sure we don’t despoil other planets. Engineers heat and clean spacecraft components, and a planetary protection team samples the surface of each spacecraft to ensure it meets their high standards. For instance, the office has ensured that each Mars rover carried no more than 300,000 bacterial spores on any surface exposed to the Martian environment. (For comparison, the human body carries roughly 40 trillion total microbes.)

But all of that work comes at a cost. Former NASA Planetary Protection Officer John Rummel estimates that decontamination efforts raise the price of a mission by 14 percent, typically tens of millions of dollars — and that’s just for rover missions. However, he thinks it’s negligible next to the cost of contaminating Mars forever. Unfortunately, putting people on the Red Planet might mean tossing existing planetary protection rules out the window.

Our Bodies, Our Bugs

When humans do make it to Mars, they’re going to take a few trillion tiny friends along for the ride, no matter what. Even if we could withstand the high temperatures and powerful solvents necessary to destroy our microbial companions, we’d die without them.

“We’re so full of bugs that there’s going to be no way to keep the environment completely pristine,” says Harrison. That likely means rethinking decontamination. “We can try to be as careful as we can, but we have to accept that there is some level of risk inherent with humans there,” she says.

Brent Sherwood, a program manager at NASA’s Jet Propulsion Laboratory, also thinks it’s time for a change. At a 2017 astrobiology conference in Arizona, he argued that planetary protection rules need to be revisited, pointing out that the permissible contamination level has not changed since 1967, and hasn’t kept pace with our technology and understanding of life. “It’s 50 years old, and there ought to be some activity to look at it fresh,” he said. At the same meeting, the SETI Institute’s Margaret Race concurred: “We’re at the point where we have to update the rules of the road.

Not everyone agrees. Rummel doesn’t believe a rule change is necessary, contending that it’s possible to keep a site clean even though human explorers are inherently dirty. “Regulations are doable and followable,” he says. “You have to understand why they exist in the first place.”

The Curiosity rover has safely studied the Red Planet since 2012. (Credit: NASA/JPL-Caltech)

However, even if the current protocols don’t need to change, not everyone is as careful as NASA. “I think it’s fantastic that [private] companies are pushing the limits and pushing the ideas and are getting people excited,” says Nina Lanza, a planetary geologist at Los Alamos National Laboratory in New Mexico. But she’s also afraid that as those companies seek to be the first to land humans on Mars, the competition will overshadow and even hurt the scientific process. “That’s awesome, but it’s not as careful as we really need to be thinking,” she says.

Ultimately, how and where we hunt for life will likely shape the new approach to contamination. With water being a key ingredient for life as we know it, environments rich in the substance are considered the most habitable, so they’ll play a key role. (While life could evolve in an unexpected water-free way, it makes more sense to focus on the one path evolution is known to have followed.)

Today, only the most stringently scrubbed spacecraft are permitted to explore water-rich areas, classified as “special regions” by NASA. Most rovers don’t make the cut. “Wherever there is water, you are not supposed to touch or smell it,” says Edgard Rivera-Valentin, a planetary scientist with the Universities Space Research Association at the Lunar and Planetary Institute.

If NASA’s clean robots can’t visit habitable regions under today’s rules, then the buggy humans who pilot them are definitely out of bounds. But special regions are, by definition, the most interesting to life-seeking scientists, and of course human Martians will need water to survive.

Rummel sees a way to keep everyone happy. Clean rovers could retrieve ice and bring it back to human habitations. “If we’re going to send people to Mars,” says Rivera-Valentin, “it should be to areas we don’t think that life can be.”

Another way to resolve the tension between wanting to examine but not spoil the most delicate possible ecosystems? Simply wait. “If there’s life on Mars now, then there’s going to be life on Mars in 10, 50, 100 years,” Clifford says. Surely, the biggest discovery in human history is worth delaying while we improve sterilization technology and let robotic missions further scout the Martian biosphere in the meantime.

“I would much rather us take a slower, more thoughtful pace in our exploration of Mars,” says Clifford, “than go hellbent and send a manned spacecraft as soon as we can at the lowest possible cost — and in the process, potentially irreversibly contaminate the planet.”

Nola Taylor Redd is a freelance science journalist with a focus on space and astronomy. Find her on Twitter: @NolaTRedd. This story originally appeared in print as "Protecting Mars From ... Ourselves."